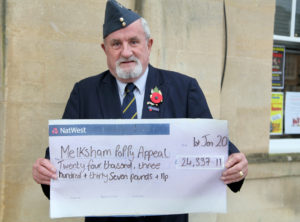 POPPY Appeal organisers have praised the generosity of Melksham and surrounding villages for raising over £24,000 for this year’s appeal.

The money raised will help servicemen and women affected by past and current conflicts. Poppy Appeal organiser, Trevor Paterson said, “On behalf of the Melksham branch of the Royal British Legion, I would like to thank Melksham for this year’s magnificent collection for this year’s Poppy Appeal.

“Our total this year came to £24,337.11. I would like to thank Sainsbury’s, Asda, Waitrose and Aldi for allowing us to have manned tables in their stores for the two weeks of the Poppy Appeal – the total raised at our tables came to £14,029! Thank you to all the volunteers who gave their time to man our tables in the various stores in Melksham, raising that magnificent amount.

“I would also like to thank the ladies and gentlemen of Melksham and Atworth who did house to house collections in these towns – the total came to £1,216.

“I would also like to thank Matt Sidnell for organising the rugby match between the rugby club veterans and the army veterans. This event raised a total of £1,065 towards this year’s total. And thank you to the Melksham Army Cadets who collected for us during the match and evening in the clubhouse.

“Thank you also to our local schools here in Melksham, Shaw and Atworth – they raised a total of £1,790.54.

“And finally I would like to thank all the shops and businesses in Melksham and the surrounding villages for allowing us to put our poppies and tins in their premises during the collection period.”

One Response to ‘Magnificent’ Melksham raises over £24,000 for Poppy Appeal