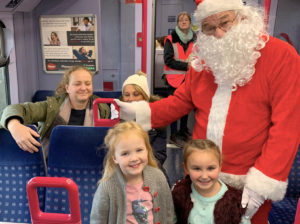 Father Christmas on board Santa Train

Santa was on the train, with over a hundred happy passengers – children, parents, and volunteers all joining in the Christmas cheer.

Graham Ellis, vice chair of MRUG said, “Big ‘thank you’ to GWR for running the train and providing the tickets, to Melksham Tourist Information for selling the tickets, to The Toy Shop in Melksham for helping Santa’s elves choose the presents, to the GWR staff (up to director level) who helped in the planning and on the day, to all the MRUG volunteers who helped, and of course to Santa himself and to all the parents, grandparents, guardians and children who came along too.

“The Melksham Rail User Group’s first public meeting of the New Year is on 22nd January at 19:30 at the United Reform Church. Guy Watts of GWR’s fare guru is coming to answer question on trains and getting good travel value.

“Trains call at Melksham daily – from 05:33 in the morning to 21:10 at night, with slightly later start and finish at the weekend. That’s a longer day than in was until December and means you can be in London for 7am and not leave until a quarter to eight at night!