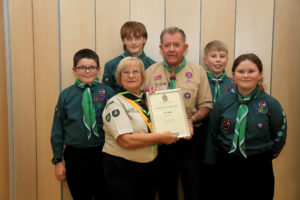 LOCAL man, Frank Alford, has been awarded the Chief Scout’s 60 Years of Service award for his continued voluntary work with the scouting movement.

Frank was presented with the award on Friday 10th January by district commissioner Christine Broom  with his current scouting group, from Bowerhill Scouts, present. He is one of just a handful of people in the country to reach 60 years of service to scouting.

Frank became a Scout in 1951 at the age of 11 and became a Young Scout leader at 19. He then went on to become assistant leader and later Scout leader at Melksham Scouts where he remained for 35 years. He moved to Seend in 1995 and then again moved to Chippenham in 2005 where he stayed for nine years. Frank then moved on to Wiltshire West District Scout Active Service Unit with 1st Bowerhill Scout Group where he remains as Scout leader.

During 1980 to 1999, Frank worked with scouts in America through International Scouting and Camp America, working as a Provisional Scout leader and Camp Programme leader in North Carolina, Tennessee, New Jersey and New York.

During Frank’s 12 trips to America, he covered over 14,000 miles and 32 states. He regularly gives talks to sections across the district and county, of his travels and experiences.

He also received his 50 years of service award in 2009 and the Silver Acorn Award for scouting in 2017.

District commissioner, Christine Broom said, “Frank is a dedicated leader who works extremely hard to develop Scouting. He has given so much to Scouting and given outstanding service over his 60 years.

“Frank has also been a fundamental link with the fundraising team at Bowerhill, planning and organising activities with the group, undertaking many projects which have raised several thousand pounds to date.”