Couple to lose their locks in memory of their daughter 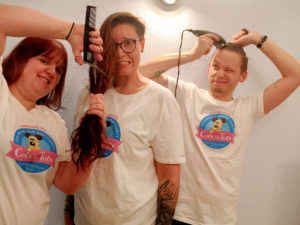 A MELKSHAM couple have organised a ‘hair-raising’ fundraiser to mark what would have been their daughter’s second birthday.

Charlotte and Rich Lavery’s daughter, Dotty Isla, died in 2018 at the age of two-days old, after being born nine weeks premature with a rare congenital heart defect.

Inspired by the support and care they received from staff at St. Michael’s Hospital in Bristol, Charlotte and Rich are raising money for Cots for Tots,  a special care baby charity raising money for the neonatal intensive care unit at the hospital.

Charlotte and Rich,   who now have a five-month old daughter called Nora, will be shaving their heads at a special event next month. Their friend, Jodie Williams,  who supported the couple whilst Dotty was in hospital, will also be losing her locks for charity.

And to coincide with the headshave, the couple will also be hosting a cake sale. For the fundraiser, they have set themselves a target of £1,000, and so far nearly £300 has been raised.

“The care we received when Dotty was in hospital was absolutely amazing,” said Charlotte. “Because of this, we are aiming to mark what would have been Dotty’s birthday every year with a fundraiser. We held something last year to mark her first birthday – and this will be to mark her second.

“We’d love for as many people as possible to come along and support us, and help raise money for this special charity.”

The headshave and cake sale will be held on Friday 7th February at Buds Bar, Lowbourne, from 7pm to 9pm.

To donate and support Charlotte and Rich’s fundraiser, visit: www.justgiving.com/fundraising/richandcharlottelavery