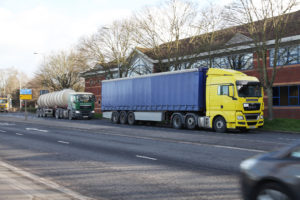 AN extra 200 heavy lorries a day could be diverted through Melksham on the A350 due to the weight restriction on Bath’s Cleveland Bridge.

Figures from Wiltshire Council say that Melksham could see up to 1,650 vehicles over 18-tonnes travelling through the town a day – an increase of 14% compared to traffic before the diversion.

Bath and North East Somerset Council (BANES) has enforced the 18-tonne weight limit restriction on the A36 Cleveland Bridge due to it being ‘under threat structurally’.

The diversion,  which shifts heavy duty vehicles heading south from the M4 along the A350, began last  week and already residents are feeling the effect, with reports of a marked increase in heavy traffic.

In response to the increase in traffic, residents and local councillors are again calling for a bypass to be built to the east of Melksham and around Beanacre.

Beanacre resident Gary Jardine, who lives on the A350, told Melksham News, “It has made it more difficult getting into town – not to mention the impact it has had on air quality, which was already bad enough! I used to run along the A350, I wouldn’t dream of doing that now – it’s getting worse and worse.

“An HGV broke down on the Farmers Roundabout – and the traffic was tailed back through Beanacre. This is one problem that will happen more frequently. And I’ve seen lorries stalking cyclists as they are too frightened to overtake – which again backs up traffic.

“This will get worse when the bridge in Melksham’s town centre is closed to southbound traffic! I don’t know what the answer is, apart from a bypass.”

Vice chair of Melksham Without Parish Council, cllr John Glover said, “A typical BANES answer to a problem. Just like their air quality solution, pass the problem to someone else – Wiltshire.

“With weight limits in Bradford, most traffic south will be diverted through Beanacre, our  problem, and the west of Melksham. There will be a knock-on effect for northbound along the Semington bypass. If this is to be a constant irritant, not least because the BB&SC strategic route linking the A36 with the A46 across the River Avon was abandoned following objections from many Bathonians, then we too need to look to a solution for Beanacre, Melksham and the Semington bypass.

“This could be some form of bypass to the east of Beanacre, and Melksham/Bowerhill linking to the A350/A361 roundabout. Staying as far away from present housing as possible.”

It is unknown how long the Bath diversion will be in place, but BANES has provisionally indicated that repair works to the bridge will be carried out during the summer – subject to a funding bid to government to support the cost of remedial works. And leader of Melksham Town Council, cllr Vanessa Fiorelli, has called for people to be understanding of the dilemma BANES is facing.

“He stated that the decision was made based on a recommendation from structural engineers. BANES has a responsibility to act on that recommendation, if they don’t, it could lead to the bridge collapsing – which could be catastrophic. I’m sure the public don’t want to see anything to that extent happening as it could mean serious injuries or even fatalities if the bridge were to fail.

“The restriction is temporary and cllr Butters stated that they are aiming to have the work done in the summer. Whilst no-one wants to see communities along the A350 negatively impacted by this decision, it is important to remember that irreversible damage to the bridge could see a significantly higher volume of traffic travelling along the A350 if the bridge were to close to all traffic.

“I trust that BANES will work tirelessly to ensure the work to the bridge is carried out as soon as possible. In the future, I would hope that any decisions made by a local authority involved consultation if it is likely that surrounding communities will be affected.”