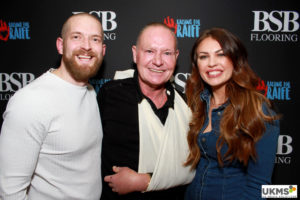 Nearly £2,000 was raised for local charity Raising for Raife at the event last month, which was attended by hundreds of football fans eager to listen to the former professional footballer recount stories from his career.

The money raised will go towards the cost of an operation that will help Raife, who was born with cerebral palsy, walk on his own – an operation that Raife does not qualify for on the NHS. Money will also go towards his aftercare. Raife’s family are hopeful that his operation will be able to go ahead this year – and are expecting news by the end of March.

Raife’s parents, Andrew and Laura, who attended the evening with ‘Gazza’, said, “We had a lovely evening last night listening to stories from Paul Gascoigne! Thank you to all that bought raffle tickets and bid in the auction – £1,978 has been raised for ‘Raising for Raife’.

“Thank you to UK Media Solutions for organising the event. BSB Flooring for sponsoring, Sparkle In Style for the fab balloon displays so kindly donated, and to the few lovely ladies that donated raffle prizes.”

Martin Burnett from organisers UK Media Solutions, which is based in Melksham, told Melksham News, “Paul had an accident the day before the event, and cracked his collarbone. But that didn’t stop him coming to Melksham – he didn’t want to let his fans down! It was a great evening, and Paul had a lot to say when he was on stage.

“We are proud to have raised £1,978 for Raising for Raife. He is a wonderful little boy who lives in Melksham, who is fundraising for a much-needed, life-changing operation that is not funded by the NHS.”