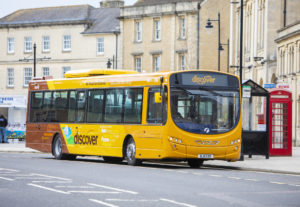 THE uncertain future of Melksham’s bus service to Bath is causing anxiety for its users, who have described the news of the D3 service’s axing as ‘devastating’.

First West of England announced last month that the discover D3 service between Bath and Melksham via Box and Atworth will be ending on Saturday 4th April, as it is failing to cover its costs and is making a loss.

The axing of the D3 bus  will leave Melksham with no evening or Sunday bus service to and from Bath, which has sparked a huge outcry from its users who rely on the service to get to work, go to college, get to hospital appointments, and get home in the evening. And an online petition to save the service has attracted the support of over 1,000 people.

Wiltshire Council – who currently contract the evening and Sunday service between Melksham and Bath to First Bus,  and support the service with subsidises –  has said that they are seeking an alternative operator for the service, but further information will not be available until mid-March.

However, local transport experts have urged residents to make their feelings heard at Wiltshire Council to ensure that they follow through with their promise – highlighting what happened in 2014, when Melksham lost its evening bus service to Chippenham when it was not replaced by the council.

Some reassurance has come from Faresaver, who operate the X72 service between Melksham to Bath during the day from Monday to Saturday, who have  said that they intend to tender for Wiltshire Council’s evening and Sunday service contract; and that they are also currently working on a ‘enhanced’  X72 service that will provide a bus service to all stops on the D3 route that are not currently covered by the X72 – which includes Whitley and Melksham Forest – if they are adequately used.

About the loss of the service, local resident Kelly Williams said, “I often use this bus to get to my son’s appointments at the RUH. With parking as bad as it is at the hospital, the bus is a God-send and takes all the stress out of getting there”

Debbie Angier Houghton said, “My daughter gets the very early morning bus to Bath in the week and on Saturday/Sunday and a bus back as late as 8pm in the evening. She relies on this service daily as she cannot drive to get to Chippenham for the train. This has stressed her out as she thinks she has to hand her notice in at work.”

Sarah Costigan added, “This is drastically going to affect people, whether it’s work commitments, appointments further afield or just in general. What about the people that have disabilities, lower income, how are we meant to afford higher prices, walk further to bus stops? This is absolutely stupid, how are people meant to get back later in the evening?”

At a public meeting last week, hosted by the Melksham Rail User Group, nearly 50 attendees resolved to call on Wiltshire Council to provide a supported evening and Sunday bus service from Bath to Melksham.

The group is also calling on all bus operators and Wiltshire Council to work together with the community to ‘plan and implement public transport to encourage increased future use’.

In response to questions from Melksham News about the future of the evening and Sunday bus service, cllr Bridget Wayman, Wiltshire Council cabinet member for highways said,  “Buses between Bath and Melksham are provided by two companies – First Bus which runs service D3 and Faresaver which runs service X72.  First Bus has decided to discontinue the service D3 but Faresaver will continue and is looking at whether its service can be enhanced during the daytime, to cater for those passengers who previously used the D3 bus.

“We are currently seeking an alternative operator for the evening and Sunday buses between Bath, Melksham and Devizes. This will require a procurement exercise and so further details of evening and Sunday services will be available mid-March.”

Days after the news broke of the D3’s axing, the UK Government announced that they are investing £170m to improve bus services. This will include  £30m to local authorities in 2020-21 to ‘restore lost services where they’re needed most’. And according to the Melksham Rail User Group, Wiltshire Council could be line for a £671,000 boost in funding.