Local couple invite the nation to come dine with them 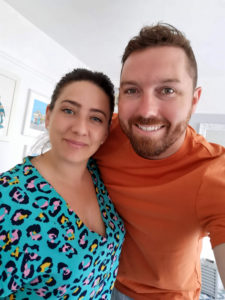 A MELKSHAM couple are enjoying their 15 minutes of fame after putting their culinary and hosting skills to the test on national television.

Sam and Kate Cox recently appeared in an episode of Channel 4’s Couples Come Dine With Me, the popular TV show that follows three couples as they each host a dinner party in a bid to win £1,000.

Speaking to Melksham News, local handy man Sam said, “Filming was quite stressful – it was four days of filming, and they were long days! We met some amazing people. Colin was brilliant, he was absolute gold. But all of them were great. It was interesting to go to people’s homes and see how they live.

“Watching ourselves on TV was not as bad as I thought it was going to be. I thought we came across fairly well – much as Kate and I are in ‘real-life’, that was us through and through.

“The reaction has been really good, people have said that we came across well and that they enjoyed watching us. But the most embarrassing thing was our garden and our patchy grass – the handy man from Melksham with a shocking garden! Twitter went a bit mental about that – I laughed at the comments, but there were some really horrible things said. People said that we must have a large dog, which we do – but it was actually Kate who killed off the grass with weedkiller!

“We did enjoy the experience, but I’m not sure I would recommend it – it was such an intense four days. We have met up with the other couples since, and will meet up with them again – that’s been the best thing about the whole experience.”

Sam and Kate’s episode of Couples Come Dine With Me is still available to view online. To watch the episode and find out if Sam and Kate won the grand prize of £1,000, visit  www.channel4.com/programmes/couples-come-dine-with-me and select the episode titled ‘West Country Series 7 Episode 30.