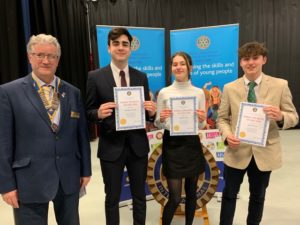 Competing against schools from across Wiltshire, Dorset and Somerset, the Oak’s senior team – students Thomas Curtin, Maddy Heal, and Josh Green – came first in their category. whilst the Oak’s intermediate team – Ewan Garioch, Cally Parfitt, and Robert McGrane – came second in their category.

Both teams will now compete at the regional finals on Saturday 21st March.

From the Melksham Oak senior team, Thomas Curtin said, “Myself (opposer of the motion), the chairperson Maddy and the proposer of the motion, Josh smashed it! The motion was as follows: ‘In order to secure a beneficial deal, the UK must align itself with EU legislation’.

“I opposed the motion stating we should leave with a no deal, I argued passionately about fisheries, trade and other areas of cooperation. Josh argued his point clear and decisively, speaking about workers’ rights, trade (tariffs) and the unfair way the EU is treating us.”

President Rita Sanders from Melksham Rotary said, “We are very proud of the students from Melksham Oak who have gone from strength to strength in this competition, encouraged and coached superbly by teacher Alex Bound. We wish them every success in the regional final in March.”

Organiser of Youth Speaks, Graham Baskerville reports, “Four intermediate teams and three senior teams competed in a tightly-contested competition in the district final of Rotary Youth Speaks on Saturday 22nd February at the Kings of Wessex School in Cheddar.

“The format of the competition was different this year.  Rather than a single speaker, the event was in the form of a debate with a proposer and opposer to a motion, with a chairperson supervising the proceedings.

“Each team took several questions from the audience – all asked by the other participants.  Everyone agreed that the new format was an improvement and the audience was truly entertained.

“The MCs even allowed a vote on each motion – just for fun. As usual the quality of the speakers was excellent, and all the participants were a credit to their teachers and parents.

“The intermediate competition took place in the morning, compered by  Brian Kirkup debated various subjects: banning of homework; exams versus course work; veganism; and the abolition of school uniform.

“Churchill Academy from North Somerset came first much to the pleasure of MC Brian Kirkup who used to be the headmaster.  The Melksham Oak Team came second, debating exams versus course work.  Robert McGrane, Ewan Garioch and Cally Parfitt will join the Churchill team to represent District 1200 at the regional finals at Exmouth College on Saturday 21st March.

“The senior competition took place in the afternoon compered by Rotarian Brenda Spenceley. The Melksham Oak team, debating Brexit, won the first place. Ably chaired by Maddy Heal, Josh Green and Thomas Curtin spoke fluently and confidently.  The team has gained in confidence through every round.

“Certainly, the standard of the speaking and the debates must make all Rotarians and teachers proud of this latest crop of students.

“Rotarians Rachel Davies and Graham Baskerville organised the event and are grateful for the cooperation received from the site and catering staff of Kings of Wessex Academy.”