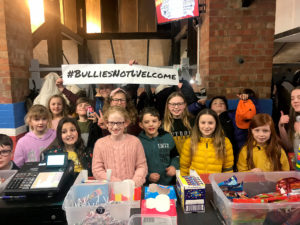 MELKSHAM’S young people are being urged to make a pledge to stamp out bullying in a campaign launched by Young Melksham.

As part of the anti-bullying campaign, ‘Bullies Not Welcome’, the local group is launching a new youth worker service, which will involve youth workers offering support to young people two nights a week in areas across Melksam, including King George V playing field.

The campaign will also involve workshops at the group’s base at the Canberra Centre, focussing on a number of issues like online bullying;.

Young people will wear wristbands to show that they support the campaign and they will also be encouraged to sign ‘pledge cards’.

Speaking to Melksham News, chair of the trustees, Jon Hubbard, and lead trustee for youth work, Jack Oatley said, “The new youth workers at the skate park and in the park will be there as somebody for the young people to go to for support, or someone to talk to. It’s important that they have somebody who is not an authority figure to approach.

“There is a need for detached youth work in Melksham with the rising issues in the community – we want to show that we are there to support them, and offer them that support if needed. Youth workers will be wearing jackets and jumpers with the slogan #BulliesNotWelcome, which will also help promote the campaign in the community.

“With this campaign we want to promote awareness – what we would like to see is that utopian world where you have a youth centre, a school, a community, that doesn’t experience bullying. That will never fully happen, but what you can do is create a world where people understand the impact of bullying, and realise sooner how their behaviour impacts others. It’s about educating people to understand what bullying actually does.

“We hope that young people will engage and learn from the campaign – learning what bullying is and the forms it can take, for example cyber bullying and trolling online.

“Bullying is happening every day with young people – what we want Canberra to be is a safe space – a space that young people can come to –  if you are at Canberra, you are safe from bullying. We hope that this campaign will be ongoing and that it reaches the whole community.”

As well as highlighting the effects of bullying and encouraging young people to sign up to support the campaign, the group will continue its work to support troubled young people, who may have been bullies themselves.

“It’s about supporting them when they come to our club nights – and everybody is welcome to our club nights,” said Jon. “If somebody has been a challenge in the school environment, we don’t stop them from coming here. It’s about working with them when they are here, to support them to realise that they can have fun without having to do it at the cost of other young people.

“We provide positive activities to young people and alongside that, we offer the teen talk counselling service – sometimes with bullying, you need to find out what it is that is causing that person to bully and gain an understanding of that. Quite often bullying is systematic of some quite serious insecurities, particularly among young people. So helping them to address that and help them to get to know themselves better – we can help to reduce bullying incidents.”

Young Melksham runs clubs on weeknights and activities during school holidays, and also additional services such as advice and counselling. More information can be found on their website: www.youngmelksham.org.uk