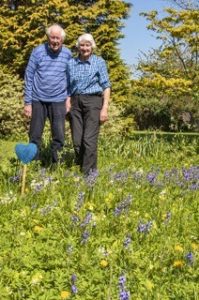 The campaign is asking gardeners, local councils, and anybody who owns and manages a green space to manage it for wildlife. This includes people with balconies and window sills.

“Wildlife in UK is under serious threat of extinctions,” says Ian Cardy, one of the people behind the campaign. “We have already lost 70 million birds since 1970, and the total mass of insects has been reduced by 60%.  Insects pollinate 80% of the crops we grow and they are essential to control pests  (e.g. ladybirds love eating aphids).  If we have no insects, there will be no birds, no hedgehogs, no bats or badgers, and crops will fail.

“Everybody now has noticed the lack of insects getting squashed on our car windscreens, and headlamps.

“Blue Heart supporters will be asked not to use pesticides, herbicides, fungicides, and to manage their sites for wildlife by helping insects.

“Things people can do include making bug hotels, bat boxes and bird boxes, leaving some of their grass to grow long, only cutting it once a year, in early spring, making a pond and leaving some ivy to grow.

“If people decide to support the Blue Heart Campaign they are asked to make a Blue Heart and put one in their garden, or in a window and Councils will be able to display one in the open spaces they manage.

“BBC Wiltshire is planning to broadcast an item about the campaign on Wednesday 22nd April at 11:30 am.