DES Hawkins from Melksham, a Flt Lt Rtd Bomber Command navigator who was awarded a DFC and mentioned in dispatches for his actions during World War II, has died. 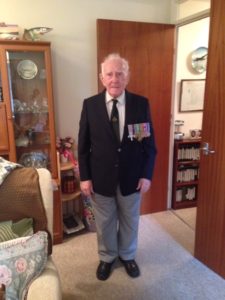 Des was born on 23 November 1922 in Warminster and the family then moved to Melksham. After leaving school, Des gained a place at Oxford University. However, he never got to experience life as an undergraduate as that September was the start of World War II.

At just under 17 years old in 1939, Des volunteered for the RAF Volunteer Reserve. Before his service started, he worked in Trowbridge and played piano for the Stanley Murray Dance Orchestra. He continued to play the piano for most of his life.

Des was called to serve in 1941. After basic training in London and Scarborough, he was sent to Canada and the USA to train in air navigation. In 1942 he was returned to England and commenced operational training on Wellington Bombers, Manchester Bombers and then on to Lancaster Bombers. 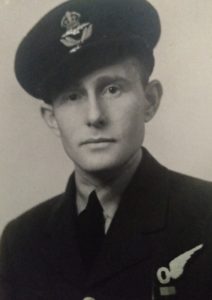 In early 1943 Des was posted to 44 (Rhodesia) Squadron at Waddington where he completed 26 ops over Germany, Italy and Czechoslovakia . On one of these ops his aircraft had to make an emergency landing because of engine problems after being shot at. He was then posted to 630 Squadron at East Kirkby where he promptly did 3 ops to Berlin over 6 days. This completed his first tour of duty in November of that year.

He then spent some time instructing navigators as they needed experienced personnel to do this. In January 1945 he was posted to 625 Squadron based at Kelstern and Scampton where he completed 16 more ops, his last being to drop food supplies over Holland.

Between 1939 and 1945, 125,000 aircrew served in RAF Bomber Command and more than 55,000 lost their lives. For many years Des couldn’t talk about his experiences but eventually he wrote a book, ‘No Future’, an accurate and astonishing description of his experiences during the war years. He described writing the book as a cathartic experience. 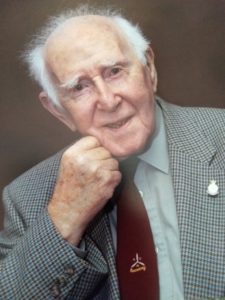 Des had many stories to tell of those wartime years, all quite extraordinary for a young man in his early twenties. On one occasion, during what he described as a “bumpy ride” due to his pilot taking evasive action to avoid enemy fire, his navigational instruments  fell to the floor of the plane. He bent down to retrieve them, only to hear a loud noise. A bullet had smashed through the fuselage into the instrument board in front of him and had he not been bending down he would have undoubtedly been killed.

Des’s navigational skills contributed to his remarkable survival, along with the skills of his pilots, and there was one in particular who he often mentioned, Flt Sgt Burness. 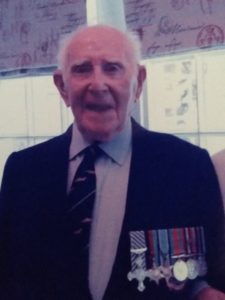 After demob he lived in Hornchurch, Essex and joined Lloyd’s of London in 1947 working in marine insurance. He joined the RAF Volunteer Reserve and at weekends flew Anson aeroplanes from RAF Hornchurch, a former Battle of Britain station. He retired from Lloyd’s in 1982.

He spent time living in Winchester, Paignton and Newquay before returning to his childhood town of Melksham where he spent his last years.