FOOTBALL loving youngster Lewis Hayward has come up with a unique way to raise money for the NHS. 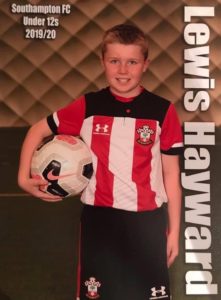 He has already raised over £1,250 with his Keepy Uppy Challenge which involves him juggling with a football (keepy uppies) and doing 250 of them every day for 14 days.

“He was initially inspired by seeing what Captain (Colonel) Tom was doing for the NHS,” said his mum, Kristen. “He said one evening ‘Can I do something to raise money for the NHS?’ and came up with doing keepy uppies with his football.

“When Lewis was born he spent time in neonatal care and has had treatment on a few occasions through the NHS during his life so he knows how important the NHS is and how hard the staff work.  He has also seen how they have saved family members’ lives too in normal times so there was no question about who he wanted to raise money for.

“The 250 keepy uppies are being done consecutively so if he drops the ball before completing 250 he starts again until completing.

“He used to struggle to do many keepy uppies but has been really practicing and focusing on this he has completed many personal challenges – he has managed to complete the challenge using a tennis ball and at the weekend he went for a walk and took the football, doing keepy uppies as he walked for just over 33 minutes.

“Initially he hoped to raise £250 but thanks to generosity of people, he has exceeded this amount. He has raised £1,257 to date as we speak….but he wants to keep going.

“He decided he wanted to keep doing it every day now through lockdown if the donations keep coming in.

“He loves football and has been playing since he was 6 years old, starting at Melksham Town Youth. He is now a signed under 12s player for the Southampton FC Academy.

“The family are all very proud of him, especially because this it was all his own idea and he commits to the challenge every day.

“Any donations will be most welcome as he attempts to keep this going as long as possible during lockdown.”

If you would like to donate to Lewis’s appeal, visit

Videos of him completing the challenges can be seen on Kristen’s Facebook page (Kristen Hayward):