A local woman is taking part in a 2.6 challenge in memory of her husband, Mick, to raise money for the Melksham charity, Evie’s Gift. 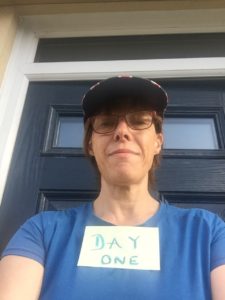 Karen Spence is running 5k every day for 26 days and has already raised nearly the double her original £260 target.

“On March 14th my lovely husband a Mick died at RUH after a month as an inpatient there,” said Karen. “This wasn’t Covid related but due to previously undiagnosed cancer which was discovered whilst he was in being treated for what they thought was pneumonia.  It had subsequently turned out to be malignant mesothelioma of the left lung (i.e. asbestos related).  He was only 50.

“Mick was an amazing man and was quite well known in Melksham as he helped to launch a stroke support group in the town for younger stroke survivors which eventually morphed into Back on Track which still operates in the town.

“Less than a week later we went into lockdown and I have been left getting used to living alone for the first time in my life… whilst social distancing.  So, when I heard about the 2.6 challenge to raise money for those smaller charities that were struggling to keep their heads above water during the pandemic, I decided I would take up a challenge to raise money for Evie’s Gift, the charity set up by my dearest friends in memory of their daughter who died from a rare brain tumour aged just 13. I am Evie’s godmother and a trustee of the charity. 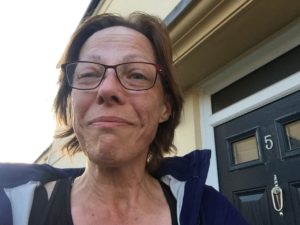 “The idea is that people do something related to the numbers 2.6 or 26 to raise money that would have been raised by the London Marathon to benefit a wide range of charities. So, because I am trying to stay active and get my daily exercise during lockdown I have committed to try and run a 5k every day for 26 days.

“I knew this would help me in terms of my physical and mental health and would motivate me to use my permitted daily exercise every day. I do this in and around King George V Park and have also got benefit from being out in the beautiful green surroundings and hearing the birdsong, seeing fellow exercisers and dog walkers.  It has also been really hard some days, especially when it’s raining… but I’m always glad I’ve been out and it’s sets me up better for the day.

“I’m off and running (literally) and would really appreciate whatever support anyone can give. Every little really will help to keep these smaller charities going at such an important time when they are needed more than ever.

“My 26th, and last, day of the challenge will be this coming Thursday, 14th May which is exactly two months to the date since Mick died.”

For more details or to make a donation, visit Karen’s fundraising page at: