SCOUTING for Girls have been announced as one of the headline acts at BBC Radio Wiltshire’s Airwaves festival. 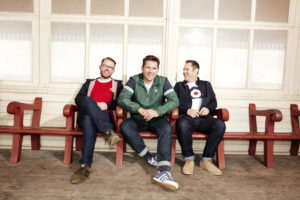 The indie rock band will play to thousands of gardens and living rooms across the county on the evening of Saturday, May 30.

Airwaves is a three-day music festival held entirely on the radio. Scouting For Girls, whose hits include ‘She’s So Lovely’, ‘Heartbeat’ and ‘This Ain’t a Love Song’, are the first headline act to be announced.

Scouting for Girls frontman Roy Stride said: “I’m really looking forward to bringing our music to homes and gardens all over Wiltshire on the last weekend of May. Don’t forget to tune in!”

Other acts announced include singer-songwriter Will Lawton and duo Burbank, both from Wiltshire, along with Bristol-based Firewood Island, who were due to play at Lechlade Festival at the end of May.

Register your interest to the festival on the BBC Shows and Tours website to get exclusive updates on the festival and access to fun downloadable souvenirs.

More headline acts will be announced in the coming weeks. The festival will run from Friday, May 29, to Sunday, May 31.

2 Responses to Scouting for Girls to headline Airwaves festival