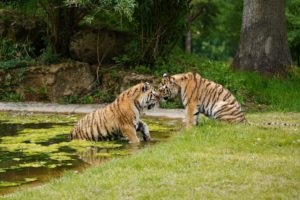 The 11-month-old brother and sister are the first to have been born at the Wiltshire wildlife attraction for nearly 20 years, and are part of a European captive breeding programme for the subspecies.

Native to the far east of Russia, the Amur tiger is the largest of the big cats and can weigh up to 300 kg and measure more than three metres in length.

“Despite the unusual circumstances with no visitors to keep them entertained, Rusty and Yuki are doing great,” said keeper Caleb Hall.

“They have got significantly bigger over the past few months and have grown in confidence as much as they have in stature. They are much more independent of mum Yana, loving to explore and playfight a lot on their own.

“With the better weather they have also started to enjoy the pond, loving to take a dip most days, never at the same time though. 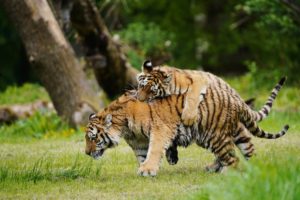 “If one cub is in the pond the other wants to stop them from coming out and trying to push them back into the water.

“Rusty and Yuki are very close though and are always wanting to know what the other one is up to and generally are always within sight of each other at all times, spending 99% of the day together doing the same things,” he added.

In the 1930s the tigers had nearly gone extinct in the wild due to hunting and logging. At one stage it is thought the population fell as low as just 20–30 animals.

Although they are still under severe threat, their status was officially changed from Critically Endangered to Endangered in 2007.

Wildlife experts believe the current population of around 540 individuals is the highest for more than a century.

There were once nine tiger subspecies, but three – the Bali, Caspian and Javan – became extinct during the 20th century.