AS a club of over 500 members, the current situation has caused the Avon Valley Runners, to think outside the box to continue to engage members and to help to keep them fit.

Club Chairman, Warren Wade says, “Avon Valley runners is an extremely active running club, providing four physical training sessions per week and hosting many races throughout the year. However, the club has had to adapt due to the covid – 19 pandemic.”

During lockdown, England Athletics have cancelled all organised races until at least June at the moment and all parkrun events across the globe are cancelled indefinitely.  But over the last ten weeks, runners have taken part in lots of virtual events, the largest of which is the Rainbow Run which is organised by a DB Max, a Melksham based sports timing company.

Each Saturday members have been signing up to run 5k around their own chosen course and have seen improvements including member Sara Robert who has clocked a lockdown personal best time of 26:13.  Rosemary Barber took part in the European Masters 5k Virtual Challenge and came 4th in Europe in her V70 age category and 3rd in the British team with a time of 26:48. 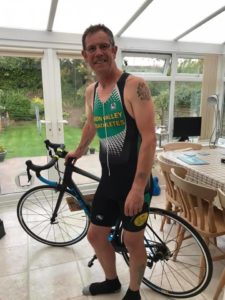 Robin-Mark the race director of the Hilly Helmet Challege

Robin-Mark Schols, who is a member of the club, also organises the Hilly Helmet Challenge every year in August but has made the decision to offer the event as a virtual challenge as it is unclear at the moment whether it could go ahead in its usual format. Details on how to take part can be found here: https://www.entrycentral.com/thehillyhelmetchallenge.

Some members have also been running at home. David Warren ran a sub 4 hour marathon in his back garden while keeping hydrated with the help of his family and 84 year old Anthony Hickson has run multiple 5ks around his garden, keeping count by moving stones into a basket with each lap.

The club also has a triathlon section for multi-sport enthusiasts and a juniors section for secondary aged children. Members have also been observing social distance rules and using Strava to run or cycle, specific segments in the hope of topping the AVR leader boards each month. The idea, devised by the club’s Vice President Darren Wrintmore, has proven popular, with many personal bests being recorded on various segments across Bradford on Avon, Westbury, Melksham, Semington, Hilperton and Trowbridge.

Many of the social aspects of the club have taken place online through Zoom meetings. 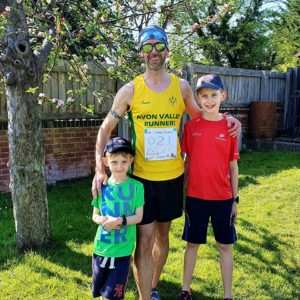 David Warren and his children – back garden marathon

Warren Wade says, “We currently use video conferencing tools to provide weekly sessions and workshops for our members covering subjects such as injury prevention, how to get the most from your fitness tracking device etc. We have held our regular monthly committee meetings and also fun sessions such as quizzes, all via video.”

The different sessions have all been organised by club members such as Garmin workshops by Sean Price, injury clinics by Mel Ward-Nichols, a quiz night by Sean and Fiona Price, managing anxiety and stress by Jay Sims-Bagshaw, personal training by Lewis Davis, running nutrition by Clare Wood and a Strava workshop by Sean some of which are still available on the club’s You Tube channel:      https://www.youtube.com/channel/UCSJlK2xtIbV1cxV0SvFmOiQ.

In the coming weeks, they also have a Zwift workshop and Q&A sessions with different members.

Mental health is a prominent topic at the moment, with concerns that the lockdown could be detrimental to the wellbeing of many people, so with that in mind Jay Sims-Bagshaw, the club’s safeguarding lead, set up AVR’s recent mental health week encouraging members to take park in daily challenges based on the themes of give, learn, be active, take notice and connect.

Holly Newman took part each day by walking her dog, running around new local areas, learning about mental health provision and donating to food banks.  She also set up the club’s Just Giving page to raise money for the mental health charity, Mind, and so far has collected £190. If you would like to donate, use this link: https://www.justgiving.com/fundraising/runwalkandtalk.

The multi-sport section of the club have also found training difficult as, not only are multi-sport events cancelled until at least the beginning of August, swimming pools and outdoor swimming venues have also been closed and restrictions surrounding outdoor exercise has only just changed to allow people to exercise more than once a day. 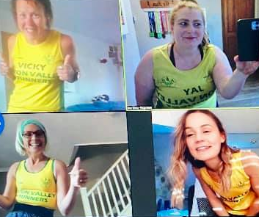 Many virtual events have also been launched through Iron Man, which have been attended in various distances by Stephen Clark, Kat Tailor-Laird, Esther Frawley, Rich Ayling and Robin Schols. The Bank Holiday Monday would have been the DB Max Westonbirt Sprint Triathlon in which many AVT members take part every year, so the alternative plan has opened up triathlon to all abilities within the club by allowing members to swap the swim element for anything of their choosing as well as being able to do all three disciplines at once or over a period of a week.

Club members Vicky Bodman, Jay Sims-Bagshaw, Maria Walters and Sally Frawley were the first to take part by completing it all together over Zoom and substituting the swim for a circuits session, cycling on a static bike and doing a HIIT session instead of a run due to injury.

Every Monday night, up to 15 AVT members also take part in a turbo session on bikes over Zoom led by Stephen Clark. Each session focusses on different cycling disciplines with a social element at the end. 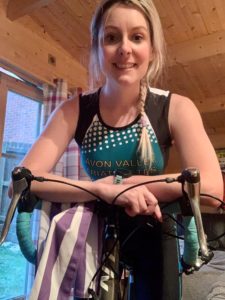 AVT secretary, Elizabeth Morris says, “the Zoom turbo sessions have been a real success, by not only enabling members to supplement their training but also a chance to catch up socially. The engagement has been so high, we’re considering continuing them as the nights draw in at the end of the year.”

The juniors have also been busy training with their families, posting a number of garden workout and daily exercise photos. Training sessions are still being posted on Facebook by the junior secretary, Holly Newman, for them to follow at home as well as being encouraged to take on the Roger Bannister 1 mile virtual challenge and the 1km virtual challenge.

The club’s senior member, Max Davis, came 17th overall in the mile challenge out of 1193 participants in a time of 4:18. Owen Lythell ran the fastest JAVR time in the 1km challenge of 2:42 landing him in 77th place out of 810 participants.

The club has had to cancel many of its open summer races such as the May and June rounds of the Westbury 5k series (hopefully July and August can still go ahead) and the 5×5 series in Steeple Ashton. 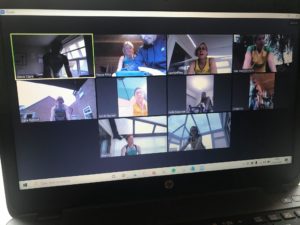 The annual AVR relay has launched as a free virtual event, “It’s a fantastic way of keeping events alive and the idea has become extremely popular over the last few months as runners can incorporate the event into their daily exercise period,” says Warren. “We are hopeful that our two biggest races [Over the Hills and Wiltshire Half Marathon] which take place in November can be held, though we are expecting some sort of social-distancing restrictions may still be in place which will mean us having to make significant changes from the way we’re used to doing things.”

The Avon Valley Runners are still welcoming new members that they would love to meet in person once training at Trowbridge Rugby Club and Culver Close in Bradford on Avon is allowed to recommence.

“It’s certainly a challenging time for us as a club but we know that once this current situation is all over we will get back to normal” concludes Warren. Until then, any new members who would like to join us can still take part in the many different virtual events that they have on offer and they encourage anyone to get involved with any working groups and to share new ideas for the future of the club: https://www.entrycentral.com/AVRMembership