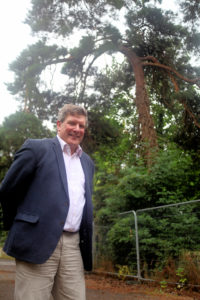 AN historic tree on the proposed Melksham Campus site that was to be felled by Wiltshire Council, has been saved from the axe by a local resident.

The 160-year-old Scots pine tree, located next to the listed stone wall that borders the campus site and Place Road, was to be felled to allow repair work to be carried out on the listed wall.

A Wiltshire Council report claimed that the tree was having a ‘significant impact’ on the listed stone wall, and that the wall could not be repaired without losing the tree. However, two independent reports, funded by local resident Robert Dickenson, refuted the council’s claims – prompting a u-turn decision by the council.

Robert told Melksham News, “The first report from a firm of structural engineers states that the Scots pine is not the reason for the collapse of the wall but is in fact as a result of the lack of maintenance of the surrounding ground over several years. The second report from a senior arboriculturist states that the Scots pine tree is in ‘good health and good structural condition and grows with two taller companion trees, with which it shares a contiguous canopy which is visually pleasing’.

Both reports were sent to the campus team at the council and they have agreed that when the stone wall is repaired, the council’s conservation officers will attend site with the contractors to establish the best course of action to safeguard the stone wall and the Scots pine.

“As a local resident, this is good news and as both reports were paid for from my own pocket, a wise investment,” said Robert.

“The Scots pine tree is in a conservation area and makes a huge contribution to local wildlife, providing a valuable food source to a local family of woodpeckers, as well as other birds such as goldcrests, blackcaps, dunnocks and wrens.

“At night, the tree is a perching site for a tawny owl and at sunset the low hanging branches of the tree encourage a long established population of pipistrelle bats to feed around its branches.

“We now just need to keep a watchful eye on the wall restoration!”

And this is not the first time a decision by Wiltshire Council to fell trees has been reversed by an independent survey.

In 2017, the council proposed to fell all 25 of the iconic Lombardy poplar trees that line the King George V playing field, after the council said they were ‘a risk to public safety’ and in poor structural condition. However, an independent survey by the town council concluded that Wiltshire Council’s survey was wrong – resulting in just three of the trees being felled.

Wiltshire Council was approached for comment, but had not responded by the time of going to press.

One Response to Historic campus tree saved from the axe