‘Laughing gas’ drug use on the rise in Melksham 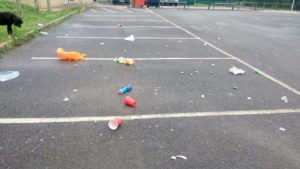 LOCAL councillors and police are raising awareness about the dangers of the recreational use of nitrous oxide cannisters – commonly known as ‘laughing gas’.

The  colourless gas is bought in small silver cannisters and is usually inhaled via a balloon – and according to local residents and the leader of Melksham Town Council, cllr Vanessa Fiorelli, the cannisters can often be found littered across the town, especially in ‘hot spots’ King George V park and Melksham House car park.

And as the drug is known to be popular with young people, local police are urging teenagers and their parents or carers to learn more about it and the associated risks. When the nitrous oxide gas is inhaled, it can make users feel euphoric and relaxed but can also  cause hallucinations, dizziness and passing out. In some cases there have been sudden death through lack of oxygen, and the effects of the gas can cause permanent nerve damage.

Cllr Vanessa Fiorelli, told Melksham News, “I live near the park, and on a Saturday and Sunday morning some areas of the park are a mess – a huge amount of litter, and it’s the same stuff every time, small silver gas cannisters, balloons, and McDonald’s food packaging.

“The Melksham House car park is also a hot spot for this activity as there are no security cameras.

“And whilst residents are frustrated about the litter, there is also concern about the effects these ‘balloon drugs’ are having on the users, as they can be dangerous. Do the people consuming this gas understand the health risks?”

The use of cannisters is increasing because they are cheap and it is not illegal to buy the gas, which has legitimate uses such as numbing pain during medical procedures, and use in catering aerosol cans and engines.

However, the gas is covered by the Psychoactive Substances Act, and is illegal to supply for its psychoactive effect – supply and production can result in up to 7 years in prison, an unlimited fine or both.

PC Lee Pelling, neighbourhood officer for the Melksham area, told Melksham News, “A rise in the use of nitrous oxide canisters is not just an issue in Melksham, but is something which is happening across the county and across the country.

“We are aware that it is a drug used by young people, so we are urging teenagers and their parents or carers to learn more about it and the associated risks.

“We will also be carrying out increased patrols in areas where it may be a problem, and will be working with partners to engage with young people and educate them about the potential dangers. It is important to remember that nitrous oxide is a psychoactive drug, covered by the 2016 Psychoactive Substances Act, which means it is illegal to give away or sell.

“It also carries immediate and long-term health risks, so please read more about it from a trusted source, such as the Frank website.”

If you are worried about someone you know who uses nitrous oxide recreationally, call FRANK – the national anti-drug advisory service – on 0300 1236600 for friendly, confidential advice or visit the website: www.talktofrank.com/drug/nitrous-oxide