Milestone moment for ‘The Friends Garden’ 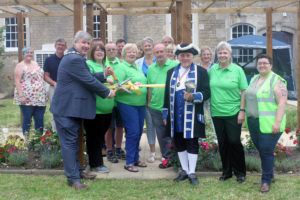 MELKSHAM Town Council has agreed in principle to take on ownership of ‘The Friends Garden’.

However, the council is first seeking solicitor advice about what their financial responsibility will be for the access road off King Street which leads to the community space, which is shared with local residents.

Following advice from a solicitor and information from the Land Registry, the council will then make a final decision.

At the full council meeting held online earlier this month, cllr Adrienne Westbrook said, “This is a positive move. After eight years of deferring the decision we have finally said that we do want the garden – subject to clarification about ownership of the road.”

Whilst discussions have been ongoing, the space has been transformed by a team of volunteers from the Melksham South West in Bloom team and foundation students from Lackham College, with work finishing last year.

The gardens were formerly opened in July last year, before quickly being closed to the public days later because of the ongoing legal concerns.

If formally taken over by the town council, the Melksham South West in Bloom team will continue the upkeep and maintenance of the space at no cost to the council.

Cllr Kathy Iles, who is also chair of the Bloom team said, “Bloom is willing to take on all of the work at no cost. We only ask that the town council prune the trees when needed at the back of the garden.”

Picture: Mayor at the time, cllr Jon Hubbard, officially opened The Friends Garden in July last year, shortly before it was closed to the public again.