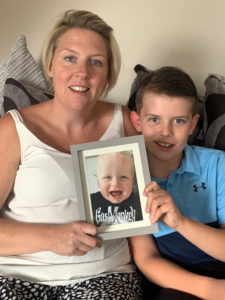 NINE year old Forest & Sandridge student, Ollie Tuckwell, will climb Mount Snowdon – the highest mountain in Wales – next week in memory of his 10-month old cousin who died this year.

Ollie will make the climb on Friday 31st July, which coincides with ANE Awareness Day – an annual event that raises awareness of the rare disease called Acute Necrotizing Encephalopath of Childhood (ANE) – the disease that his cousin, Grayson, died of in March this year. ANE is a rare neurological disease that affects the brain; it usually follows an acute, mostly viral, infection.

Ollie will be making the climb with other family members, including his mother Vicky. An initial fundraising target to raise £500 for the Grayson’s Legacy Support Trust – an organisation set up by Grayson’s parents to raise awareness of the disease and raise money to support other affected parents – has already been smashed. So far, over £1,700 has been raised.

Ollie told Melksham News, “I feel nervous because it’s going to be very difficult,but I’m doing it to raise money and awareness for Grayson’s charity.

“I want to raise as much money as I can to help other children and families and make sure more people know about ANE.”

Picture: Vicky and Ollie Tuckwell with a photo of Grayson, Ollie’s cousin who died this year age 10 months.