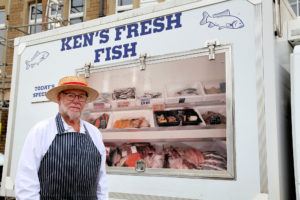 MARKET trader Ken Langley will make a triumphant return next week to Melksham’s Tuesday market following a U-turn decision by Wiltshire Council about his ban.

The owner of Ken’s Fresh Fish has praised the support of his customers and the Melksham News, explaining that they have been instrumental in his return to the market.

The fishmonger had been banned from all Wiltshire Council markets after he turned up to trade in the Market Place on a day in August when the market had been cancelled due to expected high winds.

But the fishmonger explained that he had been informed “too late” about the cancellation and that he had already purchased stock for the next day – and that his van was not at risk of being blown over like other more traditional stalls.

And following a huge public outcry to a story in the Melksham News, Wiltshire Council back-tracked on their decision.

Initially reluctant to return, Ken made the decision to come back to the Tuesday market when he received verbal reassurance from a Wiltshire Council representative that he would receive at least 24-hours’ notice of any future market cancellations.

“I’d like to thank everybody for doing such a fantastic job supporting me – this has been part of the reason I’m coming back,” said Ken.

“I’ve had so much support from the general public – people as far as Swindon have been calling me up and it’s made the papers there too, and I’ve had the national papers ringing me too!

“Melksham News and its readers have done a hell of a lot for me – thank you for your support.”

On the day of their U-turn decision (Wednesday 30th September), Wiltshire Council had told Melksham News that morning that they would be standing by their decision to ban Ken.

That decision was reversed after the Melksham News began circulation that same day, reporting on the “online stink” to the news of Ken’s ban.

In an updated statement sent to Melksham News on the afternoon of Wednesday 30th September, cllr Bridget Wayman, cabinet member for highways, Wiltshire Council, said, “We realise the importance our markets play in supporting local communities. It is extremely rare for a market stall holder to lose their pitch and this only happens where a major breach of the licence occurs.

“Upon further reflection, and following some representations from some local councillors, we have agreed to allow the fishmonger to trade at Wiltshire Council markets again. The safety of market-goers has to be our highest priority and the trader made a conscious decision to trade when he knew the market was closed due to safety concerns. We have reminded him of his responsibilities and how vital it is that he adheres to the council’s market regulations which he has signed and is bound by, and that we can’t allow something like this to happen again.

“We have made the decision to suspend his licence for four weeks, but he will be allowed to trade again from 6 October as he already hadn’t been trading at one of our markets for the majority of that period of time.”

One Response to Back in his rightful ‘plaice’! Public outcry forces council U-turn on fishmonger’s market ban!