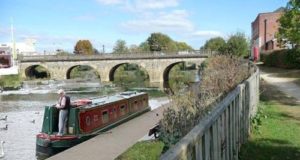 PLANS for a  Melksham canal could move forward  in ‘the next few months,’ with the town council saying that if it gets the go-ahead, it could have “enormous economic benefits” for the town. The news follows an eight-year wait for planning permission.

The plans also include a footpath and cycleway connecting Melksham to Lacock.

The Wilts & Berks Canal Trust submitted the original planning application in 2012 for the ‘Melksham Link’ – a new canal connecting the Kennet and Avon Canal in Semington and the River Avon at the Farmers Roundabout.

However, objections from the Environment Agency, which include concerns about flood risk and impact on local biodiversity and ecology, has slowed progress of the project.

But Wilts & Berks Canal Trust says that a resolution to the Environment Agency’s concerns is in sight.

Project manager for the Wilts & Berks Canal Trust, Paul Lenaerts, told Melksham News, “The Environment Agency are currently still maintaining their objection to the planning application, but we have reached agreement on all but two of their concerns, and we are hopeful that these can be resolved over the next few months.”

The council has hailed the canal project as having “enormous economic benefits” for the town if it gets the go-ahead.

“The Kennet & Avon Canal brings in £25million for Wiltshire,” explained cllr Richard Wiltshire at a town council meeting last month. “There’s an awful lot of tourism and other income available from these canals once you get them up and running.”

The ‘Melksham Link’ plans are part of a bigger project to breathe new life into the former link between Melksham and Chippenham, which itself is part of a wider campaign to rebuild the entire Wilts & Berks Canal network.

In December last year, the Wilts & Berks Canal Trust explained that plans for a path connecting Melksham to Lacock for pedestrians and cyclists were also moving forward. The route of the new path will pick up from where the ‘Melksham Link’ joins the River Avon, utilising the existing riverside walk through the town, before joining the route of the former Wilts & Berks Canal – which was abandoned more than a century ago – through the countryside to Lacock.

The new path has been described as ‘phase one’ of the ‘Destination Lacock’ project, which aims to restore the canal and towpath between Melksham and Lacock. There are also hopes to create a bridleway along the route, allowing for multi-use.

At the town meeting it was also revealed that the town council’s economic development manager, David McKnight, has “extensive expertise” in the field of canal restoration, having been a project director for the restoration and re-watering of the Kennet & Avon Canal, and running his own specialist consultancy company with his wife.

“The economic benefits to Melksham would be substantial,” said David.

The two remaining concerns of the Environment Agency are, “The likely effects of discharging locks into the river, in low-flow river conditions, on flows and levels particularly downstream of the proposed weir.

“The extent of the mitigation required to offset the negative environmental impact of the proposed weir (which has a maximum fall of around 30cm).”

One Response to Melksham canal plans to finally move forward?