Proposed Hilperton to Melksham cycle lane could connect to Trowbridge 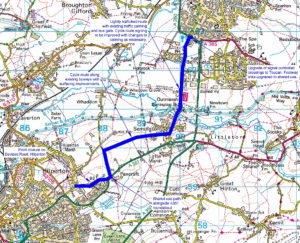 A cycle path between Hilperton and Melksham could be built under the same scheme as the controversial Hilperton Road bike lane, reports  Matthew McLaughlin, local democracy reporter.

A further bid by Wiltshire Council under the Emergency Active Travel Fund has been submitted to create provide a ‘continuous cycle route’ from Devizes Road in Hilperton and through Semington into Melksham, intended to better connect the two towns.

The report from a recent meeting said, “Should this be successful, the combination of these two schemes will provide a cycle route between Trowbridge and Melksham.”

The application, which coincides with a second round of funding from the scheme, would also see upgraded toucan crossings and surface improvements made along the route.

The schemes chosen by the government to receive funding have yet to be announced by the Department for Transport (DfT).

The report also acknowledged concerns over the lack of consultation on both bids, stating this was due to the constraints of the scheme itself.

“As more people returned to their places of work and the country started to get moving once again, increased levels of traffic were making it more difficult for the many people who had increased their levels of walking and cycling to do so safely.

“There is also less capacity on public transport due to the need for distancing, and this is adding to journeys by cars, cycling and walking.

“As a result, the Department for Transport (DfT) issued new statutory guidance as a part of its Emergency Active Travel Fund, which sets out how the Government expects local authorities to make significant, and in many cases temporary, changes to their road layouts to give more space to cyclists and pedestrians, particularly along bus routes,” the report said.

“It also states that measures should be taken as swiftly as possible, and that given the urgency, a normal consultation process is not required.

“We recognise that some may be concerned over the lack of consultation, but the DfT has made it clear that these temporary schemes should go ahead without the usual extensive consultation process with stakeholders or the public, as the timescale requirements for these schemes would not be met if we did so.”

“Comments are welcomed once the schemes have been delivered and, along with monitoring, will be used to determine how the schemes progress.”