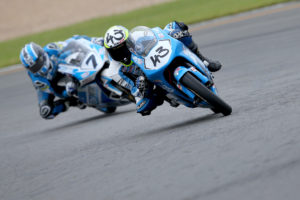 12-YEAR old Melksham racer, Ryan Hitchcock, came away from Donington Park with a 10th and 8th place finish from the penultimate round of the British Talent Cup.

The Wilson Racing rider faced his worst weather conditions so far on a Moto3 on Saturday 3rd October as he went on to pick up 6 points. In the second race on Sunday 4th,  he added a further 8 to his tally.

The weather forecasters were unfortunately right and on Saturday morning the rain meant that qualifying had to be cancelled. Whilst the British Talent Cup riders got to race, the grid positions were made up from the best lap times from the two free practice sessions on the Friday. Hitchcock would line up 11th.

Race One: This was the first time Ryan had raced the GP circuit at Donington and the conditions made it an even greater challenge. The circuit was covered in a blanket of black cloud and the rain fell for the duration of the 12 lap race.

Hitchcock held station on lap one crossing the line in eleventh place. By the third lap he was up to ninth place. Shortly afterwards he found himself riding on his own. With no marker ahead to help with racing lines on a new circuit and in difficult conditions, his pace dropped a little. This enabled a group of riders to close on Hitchcock towards the end of the race.

Although he lost a position late in the race, this spurred him on and he reduced his lap times significantly. Gaining confidence, he went on to cross the line in a very respectable tenth place at the finish line.

Race Two: The riders woke up to improved weather conditions on Sunday. Although it was still cool, the rain had gone and the track was drying. Hitchcock made no mistake with his start, gaining an impressive 7 places on the first lap and moving from 15th in the grid to 8th.

The leading group of riders had managed to breakaway at the front and although Hitchcock was unable to bridge the gap, he set a good pace finishing the weekend with a 1:46.595 on the last lap, and P7 at the chequered flag.

The number 43 now has 57 points under his belt in his rookie year and lies 9th in the overall standings.

Ryan Hitchcock said, “The conditions for race 1 were horrible and thankfully today was better. I decided to be brave and go round the outside at Redgate to make up 3 places and managed 7th in a lonely race 2. Thanks to Gary and our team at Wilson Racing for all the help and encouragement. I can’t wait for Brands Hatch in two weeks’ time. I must thank my sponsors Oxford Racing, Ducati Moto-Rapido, NGUK,113 Events, Apollo installations, Studio Creative Services, LS2 Helmets and M4Karting. Without them, I would not be racing.”