New play area will be a wonderful attraction for the town 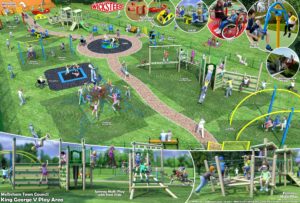 PLANS for a new exciting play area for King George V playing field have been hailed as a ‘wonderful attraction’ for Melksham.

The new design includes  an innovative slide and pull-up rope on the embankment by the adventure centre, a crusader rope swing, a wheelchair roundabout, a ground trampoline, a viking swing, and multi-play equipment. The design also includes the re-use of existing play equipment in the park – including the activity net and the nautical-themed play equipment.

The new play area will be located next to the splashpad,  with the existing site – next to Clackers Brook – ‘made good’ by contractors in preparation for plans for it to be transformed into a nature area.

Installation is expected to start in January next year, with completion estimated for March, coinciding with the grand opening of the Cricketers Café at the pavilion (see story page 9)

At the town council’s King George V committee meeting earlier this month, councillors selected Wicksteed Leisure as their preferred contractor for the works.

“I am so excited,” said chair of the committee, cllr Adrienne Westbrook, who later explained that the cost of the new play area falls within the council’s budget of £100,000, and will come from money already put aside by the council.

She said it will be a park ‘fit for the 21st Century’ and an amazing facility for all residents of  Melksham and the surrounding area.

“I’m really excited for this,” said cllr Hayley Illman, at the meeting, “it is so wonderfully inclusive. And being that we are a smallish town, to be able to have this facility that so many different types of families will be able to use, is really exciting for the town. And I hope that we can shout about this from the roof-tops.”

Cllr Sue Brown added, “This is a wonderful attraction for Melksham, I’m looking forward to bringing my grandchild to see this!”

The new play area is one of many improvements being made by the town council as part of its ‘masterplan’ for the King George V park. Other plans making progress include the creation of a sensory garden, and the installation of more benches and picnic tables in the park.

A spokesperson for the town council said, “Completion of these latest projects means that the visionary masterplan created by the council in consultation with the community for King George V  is edging closer to being completed, and its completion will make King George V one of Melksham’s destination parks, a facility to be enjoyed by all sectors of the community.”

Cllr Westbrook added, “When I was given the honour of becoming town mayor in 2017, I made a pledge to residents to improve the green spaces and play areas in the town. Our play areas had been neglected by Wiltshire Council – who can remember the waist-high grass and locked playgrounds?

“In response to residents’ concerns, the town council agreed to put in a splashpad to replace the old paddling pool and this was completed last year. The circular walkway and the gym equipment are very well used too.  The new play area was always the next stage of development, along with the sensory garden in the wooded area.

“I am delighted that members of the King George V sub-committee of the council voted unanimously in favour of these plans. The budget has already been set aside, so there is no additional burden on rate payers.

“Alongside the new areas won’t it be wonderful to go to our park, be able to have a coffee whilst sitting and watching our children or just contemplating what is happening? I look forward to the Cricketers Cafe opening as well.

“No one could have predicted how important our green spaces and play areas were to become in 2020, and although it has caused a slight delay to the playground being approved,  I believe we will truly have a park fit for the 21st Century and an amazing facility which all residents of  Melksham and the surrounding area will be able to enjoy for many years to come.”