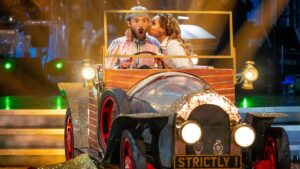 A LOCAL artist has seen his work shared with millions of viewers across the country in the BBC’s top-rated show, Strictly Come Dancing.

Jack Raisey was one of a team of volunteers that made a replica version of the Chitty Chitty Bang Bang ‘vintage’ car for a 2019 production of the musical in Frome.

And earlier this month, the very same ‘vintage’ car made its way onto the iconic ballroom dancefloor as part of television presenter JJ Chalmers’ Charleston dance routine, with Strictly-pro Amy Dowden.

Watched by millions of Strictly fans, Jack’s handiwork was given not one, but two moments to shine on the small screen, as JJ and Amy were forced to perform again in Strictly’s results show, when they landed in the ‘bottom two’.

“It was very unexpected to see it on Strictly!” said Jack speaking to Melksham News. “It’s the car that keeps on running! It was a strange mix of surreal and familiarity to see it on TV, because I could see the little details that confirmed it was the car that we made, and it brought back memories of how we overcame problems, and worked together to get it ready for the stage.”

The bespoke car was made by Jack and a small team of volunteers for the production at Frome’s Memorial Theatre. After the curtain fell on  the production of Chitty, the car was sold to another amateur theatre company in Potters Bar, who used it their own production. And it was then sold to a scenery hire company in Hampshire, which is how Strictly came to get their hands on it.

“The car has done way more than any of us expected it to do,” said Jack, “it’s just carried on going.”

Whilst Jack’s volunteer work for the Frome Memorial Theatre Company has taken a back seat this year due to Covid postponing performances, the local artist has remained busy.

This year he was involved in the new public art display at George Ward Gardens, which paid tribute to the housing developments connection to the George Ward School. And he has pitched a number of interactive art installation ideas to Melksham Town Council for King George V playing field.