OVER 2,500 new houses have been proposed for Melksham by Wiltshire Council. 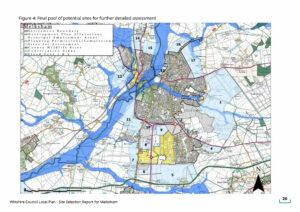 The target of 2,585 extra houses over the next 15 years is an increase over Melksham’s current housing target of 2,240, which, as reported in the Melksham News in January 2019, has already been exceeded.

The new houses have been proposed as part of Wiltshire Council’s ‘emerging’ Local Plan,  which determines where and how development takes place across the county up until 2036. Only Chippenham, Salisbury and Trowbridge have a higher housing allocation in the whole of the county.

And Melksham’s allocation is nearly the same as the combined total for Devizes, Bradford-on-Avon, Calne and Corsham.

News of the proposed plans, which are now undergoing public consultation, has again sparked concern about the town’s already stretched infrastructure, with residents and councillors highlighting the need for more health and education provision.

According to Wiltshire Council’s senior spatial planning officer, David Way, it is estimated that 45,600 new houses are needed in Wiltshire and that “difficult and critical” decisions need to be made to support this.

About Melksham’s share, he said, “We are proposing 3,950 homes (for Melksham) compared to 2,240 in the current plan. Taking into account homes completed between 2016 and 2019 and land allocated in a plan, or already with planning permission, this leaves around 2,585 homes to plan for.”

17 possible greenfield sites around Melksham have been put forward as potential sites for housing development (see map on centre pages).

Of the 45,600 new houses for the whole of Wiltshire, it has been proposed that 20,000 homes be built in the ‘Chippenham Housing Market Area’ – which includes Melksham, Corsham, Devizes, Malmesbury and Calne.  That is nearly half of the all the new homes planned for Wiltshire.

And it was described as a “substantial increase” from the current target of 14,000 new houses by the council’s David Way, at a public question and answer session about the Local Plan last week.

David Way explained that Chippenham and Melksham were the “preferred” options to build new homes in this area.

“This allows us to relieve pressures on more constrained settlements such as Corsham, Devizes and Malmesbury, whilst directing higher level of growths to larger towns, with less constraints and better infrastructure,” said David Way.

About the 17 proposed possible greenfield development sites, he said that it was important to note that not all the sites will be needed and that further work could discover that some sites are unsuitable.

He encouraged the public to have their say in the consultation about the proposed sites, and to suggest any others that may be suitable.

At the online meeting, one resident asked, “Assuming Melksham sees the suggested level of development, what level of educational and healthcare infrastructure will be developed alongside the expansion?”

In response, Wiltshire Council’s David Way said that they were working with their school commissioning department, the NHS and utility companies.

Questions were also raised about the “influence” of the proposed A350 bypass and how it might prioritise sites for selection.

Wiltshire Council representatives explained that the two projects were “separate” but “intertwined”, and that the Local Plan team would need to take into account any proposed route for the bypass as it would use land that could be used for houses.

Concern was also raised that Melksham could become a “dormitory” town as Wiltshire Council has not proposed any additional land in Melksham be used for employment to support the new homes.

Wiltshire Council says additional employment land is not needed as “the (current) overall supply of (employment) land in Melksham exceeds the forecasted scale of need”.

For information on the plan and consultation, which is open until March 9th, go to the council’s website:  www.wiltshire.gov.uk/planning-policy-local-plan-review-consultation

Comments can be submitted via the online link, by emailing spatialplanningpolicy@wiltshire.gov.uk or in writing by post to Spatial Planning, Economic Development and Planning, Wiltshire Council, County Hall, Trowbridge, BA14 8JQ.

People with no internet access can contact the spatial planning officers on 0300 456 0100 for help with hard copies.

Comments received will help shape the draft Local Plan, which will be prepared for consultation later this year – the Local Plan will not be adopted before 2023.