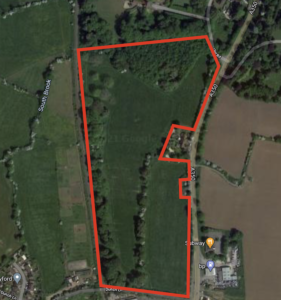 Site of proposed new development on land west of Beanacre Road (A350), north of Dunch Lane

PLANS for 170 new houses on land to the west of the A350, to the north of Melksham, have been revealed.

The new development, situated on two agricultural fields, lies to the north of Leekes and is bordered by Beanacre Road (A350) and Dunch Lane.

Developers, Charterhouse Strategic Land, are inviting the public to have their say on the plans before a planning application is submitted to Wiltshire Council.

The consultation runs until Monday 15th March and a public presentation will take place via Zoom on Tuesday 2nd March at 7pm. A short presentation will be given, followed by a Q&A session. Questions should be submitted in advance via email by Thursday 25th February – info@beanacreroad.co.uk

News of the proposed development follows recent controversy about plans to build thousands of new houses in Melksham.

And an “unwelcome” planning application for  144 new houses in Berryfield was recently given permission because of Wiltshire Council’s failure to maintain a five-year land supply – which means there is an insufficient number of ‘deliverable sites’ to provide five years’ worth of housing.

The proposed Beanacre Road development could have up to 170 new houses, including affordable houses; access on to the A350; pedestrian and cycle routes connecting the site with the town centre and railway station; and a public open space and areas of play.

For more information about the development, visit the website: www.beanacreroad.co.uk

One Response to More houses for Melksham? Plan for 170 new houses revealed