The RSPCA is appealing for information after a dead puppy was discovered in a pet carrier that had been dumped beside a rural road in Wiltshire. 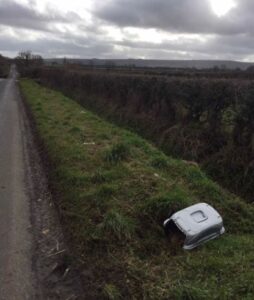 The puppy was found in a pet carrier, abandoned on Edington Road, Steeple Ashton

A member of the public found the puppy on Edington Road in Steeple Ashton at around 2.30pm on Monday, 15th February.

The tan and white coloured female dog was discovered in a grey plastic animal carrier which had been discarded at the side of the quiet rural road.

RSPCA inspector Steph Daly, who is appealing to the public to help the charity’s investigation, said, “It’s not clear when she was dumped in the area or how long she may have been dead but we’d be keen to hear from anyone who may recognise her or know where she has come from.

“We fear she may have been alive when she was dumped as the pet carrier had feces inside it when she was found, suggesting she sadly died while trapped in the carrier.

“It’s difficult to say exactly what breed of dog she is, although the vet believes she was a Jack Russell cross, and it is thought she is around six weeks old.

“It’s shocking to think she was simply discarded like rubbish and left to die at the roadside. Anyone with information should contact our appeal line on 0300 123 8018.”

The RSPCA recently launched its #ForPupsSake campaign which is calling on the UK Government to change the law to stop puppy imports and crackdown on dogs being sold illegally on the black market.

The charity says, “The demand for puppies has soared in the UK during the pandemic, which may be inadvertently fuelling the puppy trade both here and abroad, as polling revealed that 38% of UK adults considering getting a dog in the next six months would buy one that had been smuggled into the country from abroad.”

The charity’s #ForPupsSake and is urging the UK Government to increase the minimum age that puppies can be brought into the UK from 15 weeks to 24 weeks as well as introducing better enforcement checks at the borders.

To help the RSPCA continue rescuing, rehabilitating and rehoming animals in desperate need of care please visit our website or call our donation line on 0300 123 8181.