Melksham turns out in force for Remembrance

HUNDREDS of people lined the streets of Melksham to pay their respects on Remembrance Sunday. 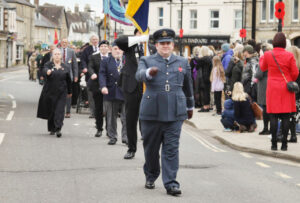 It was the first Remembrance Sunday since 2019 that the community was invited to attend, after last year’s event was held ‘virtually’ because of Covid restrictions – and the community did not disappoint.

Hundreds watched the parade, which passed through the town on its way to Canon Square, where a two-minute silence was observed.

Following the parade, a service was held at St Michael & All Angels Church to remember those who have died and been injured in war, before wreaths of poppies were laid at the cenotaph by local groups and dignitaries.

Wiltshire councillor and Melksham Town councillor, Phil Alford, who took part in the ceremony said, “Remembrance Day is the most important public event in the calendar and in Melksham, showing our respects for the fallen is something that is always done incredibly well.

“The voluntary groups and residents were exceptional and being there as a representative, and to be part of that was a huge honour.”

For Remembrance Day itself on Thursday 11th November, a small service and a two-minute silence was held at the War Memorial, Canon Square at 11am.