Coming up the Assembly Hall

THERE’S an exciting line-up planned for the weeks ahead at Melksham’s Assembly Hall with live music and some ‘forbidden’ acrobatics all lined up to entertain audiences. 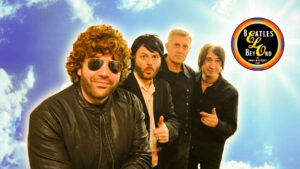 Fronted by top Jeff Lynne and Paul McCartney lookalikes/soundalikes, audiences can expect performances of the greatest hits of ELO, Paul McCartney & Wings, The Beatles, and more.

As well as loads of great music, the show tells the story behind some of the greatest hits of all-time, and how the careers of these two songwriting legends have crossed over the years.

The Forbidden Nights boys are back for an unforgettable night of song, dance, acrobatics and, y’know, some finely honed physiques.

Like the prosecco, which will inevitably be flowing, these fellas are cool, bubbly, fun and sure to make you giggle.

On Saturday 29th January it’s the turn of Foo Fighters tribute act, Faux Fighters, to take to the stage.

There are a few Foo Fighters tribute acts out there, but only one fronted by Jamie Deighton, whose physical likeness to Dave Grohl means you won’t have to close your eyes to convince yourself you’re watching the real thing.

Bringing to the stage all the energy, musicianship and good vibes of a real Foos gig, these guys always put on one hell of a show.

Working their way through all the Foo Fighters’ biggest hits plus album tracks and fan favourites, Faux Fighters are gonna bring the house down.

The new show from the UK’s no. 1 Celine Dion tribute, celebrating the iconic singer’s record-breaking Vegas residency, Julia does Celine like no one else!

For more information and to book tickets, visit the Assembly Hall website: www.melkshamassembly.co.uk

33 Responses to Coming up the Assembly Hall