QUESTIONS have been raised about why ‘The Friends Garden’ has not yet been opened to the public. 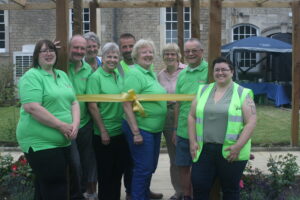 Melksham Boomers in ‘The Friends Garden’

In March last year, it was reported that the town council had agreed to ask its solicitor to proceed in acquiring ownership of the Friends Garden, eight months after they had agreed in principle to take on ownership.

However, almost a year later, ‘The Friends Garden’ remains closed to the public.

“Could the town council please advise us on what is happening regarding The Friends Garden,” said local resident Pam Wiltshire at a town council meeting last month. “Yet another year has passed and it has not been opened for general use by the people of the town.

“How on earth can the town council justify taking almost 10 years to open this?”

At the meeting, mayor cllr Jon Hubbard and the town council’s clerk, Linda Roberts, explained to Pam Wiltshire that the council would write to her with an answer.

The Friends Garden, which is intended to be a community space that can be enjoyed and used for ‘quiet contemplation’, has faced numerous delays over the years.

Most recently there was confusion about who was financially responsible for the access road off King Street which leads to the community space, which is shared with local residents.

It was also ‘officially opened’ in July 2019, after it was transformed by the Melksham Bloomers team and foundation students from Lackham College, but quickly closed again because of the ongoing legal proceedings surrounding the transfer of ownership from the trustees of the former spiritualist church to Melksham Town Council.

Melksham Town Council has been approached for a comment.