PROPOSED plans to increase the size of Forest and Sandridge School could be an opportunity to find a solution to the ongoing problem of ‘traffic chaos’ during drop off and collection times. 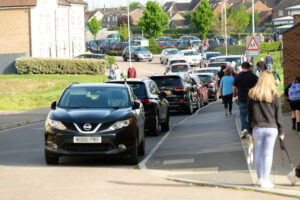 Parking outside Forest and Sandridge School.

That’s the opinion of local Wiltshire councillor, Mike Sankey, who is asking Wiltshire Council to reject the current planning application at the Western Area Planning committee meeting this week, on Wednesday 11th May.

The councillor has suggested that the plans could be improved by creating a new staff car park between the school and its playing field, and using the existing car park as drop off and collection points for pupils.

He has also suggested that a temporary overflow car park be created for the school on ‘wasteland’ already ringfenced for development next to the existing public car park off Cranesbill Road, which could also help relieve traffic congestion if construction of the school extension was to go ahead.

“We understand the need to expand the school,” said cllr Sankey speaking to Melksham News, “but this is an opportunity to look at the existing traffic problems and do something about them.

“The application as it stands does nothing to improve the problem – so I think they should be asked to take the plans away and have a think about what can be done to resolve the parking issues and come back with a plan that does something about them.”

The school says its expansion will support the school to increase its reception intake from 60 to 75, resulting in a “small and gradual” growth of the school, which currently has approximately 420 pupils.

The proposal received criticism from neighbouring residents, who said that the current road infrastructure, school drop-off area and limited available parking – which they said is already ‘extremely congested’ and ‘dangerous’ – will be unable to cope with the additional traffic.

Melksham Town Council also objected to the plans, echoing the concerns about the expansion’s impact on traffic in the area.

Cllr Sankey was invited last month to meet with representatives from Forest and Sandridge School and Wiltshire Council to discuss why he ‘called in’ the application. At the meeting he presented his ideas for improving the plans, which he says were met ‘favourably’.

His suggestion to create a new staff car park between the school and its playing field was met with some resistance as the loss of land would result in a reduction in the amount of recreation space available to students.

“According to Sport England there has to be a certain amount of outdoor space per child at the school,” explained cllr Sankey, “so the school thought this could be a stumbling block. But I suggested that once the kids have been dropped off, the car park could be allocated as a playground – helping to satisfy the requirements of Sport England.”