NESTS and chicks belonging to birds of ‘conservation concern’ were removed and ‘destroyed’ by Wiltshire Council during the demolition of the former Christie Miller Sports Centre in Bowerhill. 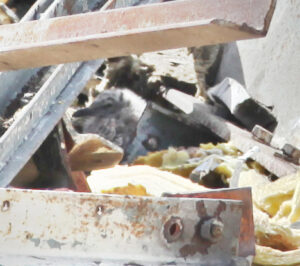 Gull chick amidst the rubble.

The council says that they obtained a licence from Natural England to carry out the works, because of concerns that the building posed a threat to public health and safety. However, local wildlife lovers have criticised the council for not waiting until the birds were fully fledged.

The roof of the building, which has been empty since the sports centre closed in 2018, is an annual nesting site for a variety of gulls, including Herring gulls, whose population is on the decline in the UK, putting them on the ‘red list’ – the highest level of conservation concern according to the RSPB.

And whilst all birds, nests and eggs are protected under the Wildlife and Countryside Act, visitors to the site on the Bowerhill Industrial Estate witnessed demolition works taking place as gulls nested and raised their chicks.

“It could have been delayed a few weeks until all had fledged!” said local wildlife lover, Sue Tweedie in response to Wiltshire Council’s statement. “The building has been there for years deteriorating, another few weeks would make no difference.

“It’s a travesty to harm any birds nesting! What on earth do they think they’re doing?! The disregard for wildlife of any kind is appalling. Seagulls have come inland more and more because of habitat loss – their food source depleted. It needs to be stopped until they have completed breeding.

“When I see or hear of anything like this it cuts me to the core. We are a part of nature not apart from it!”

Wiltshire Council has told Melksham News that because of ‘serious concerns’ about the ‘stability of asbestos materials’ on the site and its risk to the health and safety of the community, they obtained a licence from Natural England that allowed them to ‘remove and destroy’ the nests.

“It is regrettable that any wildlife is disturbed or harmed as a result of the demolition of these buildings,” said Wiltshire Council’s cabinet member for leisure and operational assets, cllr Ian Blair-Pilling. “However, Natural England asks that the loss of birds as a result of removing the nests is minimised and that they are to be dispatched quickly and humanely.”

A spokesperson for the RSPB, who identified that Herring gulls were present at the Christie Miller site from photographs taken by Melksham News said, “All birds, their nests and eggs are fully protected by law, and the removal of the active nests of all wild birds requires a specific licence from Natural England.

“Herring gulls are one of the many species that need our help. The population continues to decline and they are on the ‘red list’ in the UK – the highest level of conservation concern. We cannot keep trying to squeeze nature into smaller and smaller spaces or demand that wildlife fits in with our plans. Across the UK, wildlife is vanishing at an alarming rate and our planning system must play a vital role in not just reversing this decline but helping nature to recover.”

In response to questions from Melksham News about the demolition works and its impact on the nesting birds, Wiltshire councillor Ian Blair-Pilling said, “The health and safety of our communities is always our priority. The former Christie Miller leisure centre and highways depot buildings need to be demolished as quickly as possible due to serious concerns over the stability of the asbestos materials on site. Sections of asbestos roofing are failing and collapsing, the structure and therefore surrounding structures are at risk during high winds and other extreme weather events. 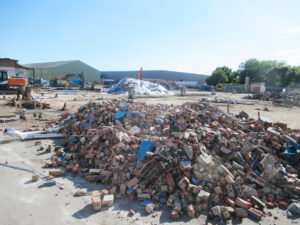 “The demolition was due to start in January, but delays in finding a suitable contractor prevented the work from starting at that time. Due to the need to get on with the demolition as quickly as possible, the council applied to Natural England for a licence under the Wildlife and Countryside Act 1981 to undertake bird control in the form of disturbing wild birds and their nests whilst those nests are in use or being built.

“It is regrettable that any wildlife is disturbed or harmed as a result of the demolition of these buildings, however Natural England agreed the safety concerns and costs associated with delaying the demolition outweighed the impact on the wildlife and granted a licence that runs from 28 May to 31 August 2022.

“The licence contains a range of provisions, and we are monitoring the contractor to ensure that they are operating in strict accordance with these. One of the key requirements is that when nests have been removed, the birds should be prevented from returning and rebuilding, so that they have to relocate.

“This is achieved by removing the nests by hand and the corresponding section of roof is then demolished straight away.”

When asked for clarity by Melksham News about how the nests are removed, and how the process is monitored, cllr Blair-Pilling added, “The health and safety of our communities is always our overriding priority and because of the unstable asbestos materials on site we have been granted a licence by Natural England to remove and destroy the nests.

“It is regrettable that any wildlife is disturbed or harmed as a result of the demolition of these buildings, however Natural England asks that the loss of birds as a result of removing the nests is minimised and that they are to be dispatched quickly and humanely.

“Under the terms of the licence the contractor is required to provide returns and evidence of their activity to Natural England who are monitoring the process. Members of Natural England’s enforcement team visited the site today (Friday 10th June) to study the evidence and returns and are entirely satisfied and happy that the contractor has operated and is operating with strict adherence to the licence conditions.”

The remaining nest removals and demolition of remaining sections of roof were completed last week.