OVER 500 people came together this month to celebrate the local lesbian, gay, bisexual and transgender (LGBT) community at the town’s first ever Pride Festival. 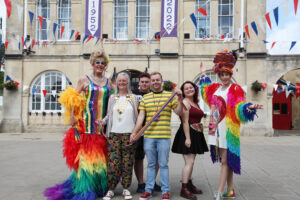 At the event – which promoted an important message of acceptance and inclusivity within the local community – the crowds were entertained by a line-up of local drag queens, an Olly Murs tribute act, and a host of stalls promoting local charities and businesses.

“What an incredible day,” said festival organiser and founder of Proud Melksham, Ryan Clarke, speaking to Melksham News. “The local community really came together to support us. It was so fantastic to see so many families and young people at the event. If anything, the event showed just how much this was needed in Melksham.

“We’ve received tonnes of messages thanking us. Everyone has noted how great the atmosphere was, how they could be themselves and that no-one was there to judge – it was a moving and emotional day for so many people. For so many people, it was the first Pride event they had been to – helping these people feel included and seen has just been so fantastic.

“The event raised a huge £1,782, more than we ever could have imagined, which allows us to continue what we are doing and to put an event on again next year.

“I couldn’t be more proud about how far Proud Melksham has come in the last year, from creation, to our coffee meets, engaging in events in the town, becoming a registered charity, and our year culminating in a Pride that has been so so successful.

“People are already asking about the next one, so in the next few weeks we will begin working on what we are going to bring Melksham for 2023.”

Representing the town council at the festival was deputy mayor, cllr Sue Mortimer, who officially opened the event. She said, “I was very pleased to be able to cut the ribbon on the first ever Melksham Pride Festival. It was an amazing event – brilliant to see the whole community supporting Melksham’s LGBT community.

“The entertainment provided was first class – I particularly enjoyed the lip-syncing and I know my granddaughter enjoyed the magician. I give Ryan and his team a round of applause for putting on the event that brought colour, laughter and joy to the Assembly Hall that was enjoyed by all. Well done!”

For more information about Proud Melksham –  which hosts regular social coffee meetings giving people an opportunity to meet others and find out more about the support, advice and information available to them – visit the Facebook page: www.facebook.com/ProudMelksham