MELKSHAM scout leader Christine Broom has been awarded a ‘Bar to the Silver Acorn’, one of UK Scouting’s highest achievements and given for exceptional and long service to the youth organisation. 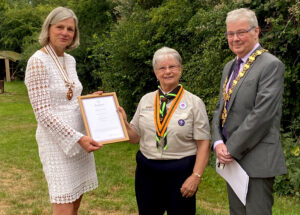 “I feel honoured and privileged to receive the award,” said Chris. “I received a letter from Carl Hankinson, UK Chief Commissioner on behalf of The Scout Association in June informing me of the award where he added his own personal congratulations on the award saying, ‘You’ve made a difference to young people’s lives, helping them to gain skills for life’.

“As a recipient of the award, I will be invited to Windsor Castle for a day of celebration and achievement in April next year.”

Chris first got involved with Scouting in 1985 when her son joined the Bowerhill Cub Pack, before becoming assistant Cub Scout Leader the following year and Cub Scout Leader with the Bowerhill Pack in 1990. In 2012 she became assistant district commissioner in the Wiltshire West District and over the years has helped to organise and lead over 100 camps, as well as a wide range of other activities including swimming, chess, nights away, scrap heap challenges and football.

In 2016 Chris became district commissioner of Wiltshire West which covers Melksham to Mere, with 12 Scout Groups and six Explorer Units.

Chris was also voted the Melksham News Person of the Year in 2010.

“Working with children is very rewarding and if I have helped to shape one young person’s future then I have achieved something,” she said. “Without Scouting I would not have had such a fulfilling 36 years and my Scouting activities have helped me to focus when times have been difficult in my personal life and I am sure Scouting will help me to get through any difficult times in the future. If you have faith and hope, you will win through in the end.

“I have been selected as part of the International Service Team to represent the UK at the 25th World Scout Jamboree in South Korea in 2023 and fly out on the 26th July 2023 for an amazing adventure, helping to give young people of the world opportunities, to make memories and have fun.”