CONSTRUCTION work has started on Melksham House, which will see the historic building become a workspace and multi-purpose community facility in the heart of the town. 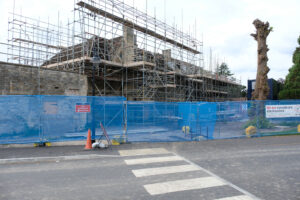 The £4.2million scheme will provide flexible office and meeting room spaces, with a community hall at the rear of the building which will provide multi-use activity spaces. Work is expected to be completed by winter 2023.

“We believe the outcome will prove to be a valuable and flexible space for the business community and residents in an accessible central location, right next to the campus, which is bringing lots of people into that area.

“At this time of national uncertainty due to the cost of living and rising inflation, projects such as this will support the local economy and help it thrive.”

Construction work began on 5th September, and is being carried out by Beard Construction. This follows a period of preparatory work that has taken place at the site over the last six weeks.

At last week’s Melksham Area Board meeting, cllr Alford said, “We agreed at cabinet to put £4.2million into the restoration of Melksham House; some additional funds were also agreed for the demolition of the Blue Pool.

“Obviously if we can keep it under, we will, but building costs have gone up, so that could be challenging.

“The council is moving towards all its new buildings being carbon zero and Melksham House is no different. It’s going to be fully insulated, with loads of green technology used, not just LCD lighting but also air source heat pumps, photovoltaics, electric charging points and no gas feeding into it. It will be a zero-carbon facility. There is a lot of work to be done, but it will all respect the heritage of the building which is grade II listed.”

Asked by cllr Jonathon Seed about the ‘business case’ for the project, cllr Alford said, “The planning condition on this building was that Melksham House had to be preserved and made available as a public space.

“In terms of recouping the money that has been invested, we probably won’t recoup that anytime soon, which is unfortunate, but that is the way it is. As a Grade II listed building, it’s Wiltshire Council’s responsibility to look after it.”

Efforts are being made to keep any disruption to a minimum and the work taking place will not impact the recently-opened Melksham Community Campus, says the council.

“We know that this particular location has seen a lot of building work and activity over the last couple of years, so together with our construction partners, we are very mindful to keep disruption to an absolute minimum for local people,” said cllr Alford.

Wiltshire Council says it will continue to work with Melksham Town Council to ensure the future use of sites such as the former Blue Pool and library locations forms part of an overall strategy for the town.