Town’s first ClimateFest is this weekend! 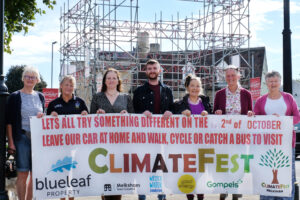 MELKSHAM’S new ClimateFest event will take place this weekend, on Sunday 2nd October, encouraging residents of the town to be more environmentally responsible.

The free event, which will take place at the Assembly Hall, Town Hall and Market Place starting at 10.30am, will feature lots of stalls, speakers, an electric car display, activities, music and food. The festival has been organised by Melksham Town Council’s environment and climate group.

Presentations on a range of subjects such as rewilding, recycling and rethinking energy sources will take place throughout the day, as well as a screening of the powerful film Eating Our Way to Distinction.

There will be an opportunity to find out more about the wildlife of Melksham’s Conigre Mead, with special tours being held throughout the day. The winners of the town’s Melksham in Bloom awards will also be presented.

In preparation of the event, a 27-foot cube, made of scaffolding, was constructed on the Market Place roundabout. The cube represents the size of a tonne of carbon, encouraging people to think about their carbon footprint. See story on page 13.

“I am proud that Melksham has committed to have its first (of many I hope) Climetfests,” said cllr Saffi Rabey from Melksham Town Council. “It is imperative that we act, not just on a global and national level, but also at a local level, to work towards a climate that is kinder, gentler and allows for sustainability in the world we live in.

“We know that even the smallest change can make a difference and the Climatefest is a great way of sharing advice on changes that can be made, alongside sharing and imparting knowledge about the wider climate crisis and what is being done to combat the issues the world faces.

“My greatest hope is that Climatefest can spark, even the smallest of revolutions, in the way people approach, or even view the climate crises we face.”

Melksham’s first ClimateFest has been rescheduled from September, as it would have taken place just days before the late Queen Elizabeth II’s funeral.

8 Responses to Town’s first ClimateFest is this weekend!