Town councillors have decided which local organisations will be receiving grant funding from the council, to support their work in the Melksham community. 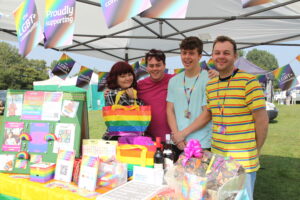 Proud Melksham members at the 2021 Food and River Festival

Celebrate Age Wiltshire will receive the maximum funding of £1,000. Councillor John Hubbard said, “I would like to endorse this application, Celebrate Age Wiltshire do fantastic work. I would commend this and suggest we fully fund it. They take music out into the community, do public concerts, but also go to people’s homes who are housebound. They have gone out and done a concert outside of Brookside. The residents who could not go outside could still enjoy it inside. It really is quite amazing stuff that they do.”

The organisations the town council have decided will not be receiving funding on this occasion are; Melksham, Chippenham and Calne branch of the Wiltshire & Berks Canal Trust because the application does not meet the criteria due to the fact the group will be funding other groups; Melksham PHAB Club and Melksham Sixty Plus Club will not be funded for their club Christmas dinners.

Speaking about the application from the Sixty Plus and PHAB Club to have funding for their Christmas dinners, cllr John Hubbard said, “I do not know what the social benefit to Melksham would be to fund this. We do not want to set a social precedent of funding this sort of thing.”

Melksham’s Monster Ball will also not be funded by the council, as they look to explore the town council’s events officer working with the organisers to facilitate the event.

Speaking at a recent full town council meeting about grants and wanting to remind organisations about the criteria for applying for this funding cllr John Hubbard said, “We need to make clear that this is Melksham money, for Melksham. We have had examples of significantly bigger organisations such as Wiltshire and Bath Independent Living Centre in Semington applying for funding, on the basis that a few local people use the service. We need to make clear that this is money to be spent in Melksham.”

The council’s policy for grant funding states that the maximum amount of money issued for grants is £1,000; grants will only be issued to organisations that benefit the town of Melksham; grant application rounds will remain quarterly in September, November and March annually; ‘red-circled’ grants are now known as major grants.