Friends of Shurnhold Fields could be forced to close

A VOLUNTEER group who look after Shurnhold Fields, Melksham’s mini country park, could be forced to disband due to a lack of new volunteers. The Friends of Shurnhold Fields could make the decision at their AGM on 25th October, unless offers of help come forward before the meeting. 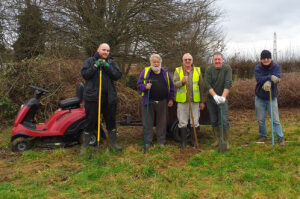 Located on the site of the former George Ward School playing fields in Dunch Lane, Melksham, Shurnhold Fields has been described as “a place to experience tranquility and nature in a beautiful rural setting, right on your doorstep in Melksham.”

The Friends of Shurnhold Field have been active for the last four years and consist of seven volunteers who are responsible for maintaining the area by cutting grass, planting trees and bulbs, and clearing ditches. The group has also created a picnic area for visitors. However, due to the type of tasks required to maintain the park, many of the volunteers are unable to continue.

“We have advertised the volunteer roles in various places but have not heard back from people, which means we will be unable to continue and will have to hand the field over to the town and parish councils.”

Those wanting to join the group do not need to have horticultural experience. Paul explained, “You don’t have to be an expert to plant trees, or do jobs in the environment. We just want people who are interested in public spaces for people to use and being outdoors.”

Amongst the group’s achievements over the last four years have been planting a wood in 2018 of 200 trees to remember those who died in World War I from Melksham; raising £3,000, including private donations from residents, to buy and plant 580 trees, five bird and bat boxes; and planting 1,800 bulbs and plants.