What next for the local Ukrainian refugee community?

A GROUP set up to support Ukrainian refugees in Wiltshire, has written an official appeal letter asking for support from local government and organisations in planning the next steps for families. 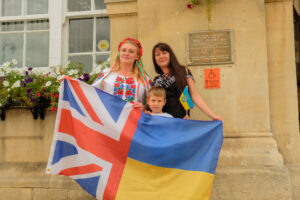 With the expiry of contracts coming, Ukrainian Refugees in Wiltshire County say that many families wish to now start an independent life and rent their own accommodation. However, they say that families are faced with the high cost and shortage of housing, along with the difficulties of registering a lease. They say that families feel they are unable to cope with this on their own and need help to move on to the next stage of their lives.

Echoing the Ukrainian refugee community’s concerns, Adrienne Westbrook, who is hosting a family in Melksham said, “It is not a good picture in Wiltshire at the moment, there is no hope for families in getting private accommodation. My Ukrainian family have been here for four months and I have said that they can stay the year, so that takes them until next May.

“Quite a few hosts are saying that after the initial six months, their families must move on. This is not something that I will be doing, but May next year will soon be with us and nobody has realistically made any sensible statements on what will happen then.

“I know that from chatting that they know they won’t to be able to afford private rental as most don’t have any credit ratings. They were encouraged to use online banks when they came to the UK, but they don’t help to build up a credit rating.

“They know they need to go down the social housing route but find Housing Benefit rules confusing. They also know that to get a house in the town they have settled in is like gold dust. It’s so difficult for them. They are also all working and that means they have no time to get all the information that they need.”

In the letter from the Ukrainian Refugees in Wiltshire group they address the people of Great Britain, thanking everyone for a “kind-hearted welcome and the support for all Ukrainian’s fleeing the war.” The letter states, “We would like to express our gratitude to our sponsors and the government – once again! Your efforts and your support have been so invaluable and so touching!

“We understand that living         together for a long period is not easy for both parties and [we] would be happy to start an independent life and rent our own accommodation. Many of us have already made attempts to rent housing through agencies. But here we are faced with the following problems: high cost and shortage of housing, and a complex procedure for registering a lease, which requires confirming of income, a guarantor, and a large deposit. Sometimes there has even been bias of the landlord against Ukrainian refugees and as a result most cases were refused.

“We are very concerned about the current situation, and we feel that we are not able to cope with the difficulties that have arisen on our own. Therefore, we ask local government and public organisations for an open dialogue.

“We, Ukrainians who came to the UK under the programme ‘Homes for Ukraine’ appeal to you in the first instance to organise an open meeting to discuss the problems that have arisen and get feedback to make a plan together for next steps.”

The letter asks local government to support Ukrainian refugees with the following; contacting real estate agencies with a proposal to develop a special house rental scheme for Ukrainians in the absence of guarantors; consider local government, job centre, employers or public organisations giving guarantee for those who do not have friends or relatives who can act as guarantors; assist with providing legal advice on obtaining compensation for housing rental costs through Universal Credit, as well as the possibility of guaranteeing payment for housing rental by Universal Credit; for local government to contribute to the organisation of the public organisation ‘Ukrainians of Wiltshire’, to act as a guarantor.

Melksham town council are due to discuss this in an upcoming council meeting.