Drive for Melksham area’s bus stops to be more digital

PLANS to introduce electronic bus screens showing departure and arrival times at bus stops and bus shelters in Melksham, are being considered in a joint project between Melksham Town Council and Melksham Without Parish Council. 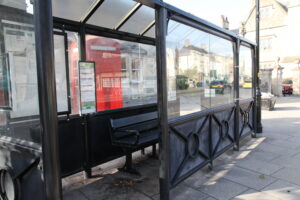 Both councils have a shared pot of funding which has come from a Community Infrastructure Levy (CIL), a charge on new housing developments in their area. This money should then be used to make improvements in the area. As a result, both councils were asked to create a priority list of things they wanted to use the CIL funding for, that would benefit all communities.

Melksham Without Parish councillor, John Glover, has proposed installing electronic bus screens in the town to provide live updates of bus journeys and information including how long passengers will be waiting for the bus to arrive.

At a meeting of Melksham Town Council, held on 10th October, cllr Jon Hubbard said, “I would like to endorse electronic bus timetables. This would benefit residents across both communities and I think it is a cracking suggestion and that we look at trying to implement it sooner rather than later.”