THE family of Michelle Phillips, who died in a road traffic collision in 2004, have now completed their fundraising for Wiltshire Air Ambulance (WAA) in her memory, raising over £20,000 for the charity. 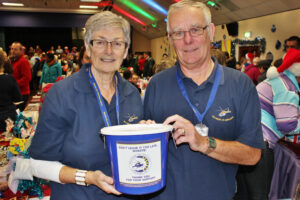 Jon and Sandra Phillips at a fundraising event.

Michelle’s family have thanked friends and the Melksham community for their ‘support and generosity’ over the years. Michelle died on 9th April 2004 in a road traffic collision in Devon, aged 26. Since then, the Phillips family dedicated 18 years of fundraising for the WAA in memory of Michelle and have taken part in and organised numerous fundraising events.

Thanking the community, Michelle’s mother, Sandra said, “We are so grateful for everyone’s support. We cannot say thank you enough. Raising money for the WAA in memory of Michelle has gotten us through the hard times. We expect we have raised much more than £20,000 due to the extra Gift Aid that could have been added on. We didn’t know we could do this, so it hasn’t been included! We are sure we have gone beyond £20,000.”

As Michelle was born and lived in Wiltshire, and the family raised money for the WAA before the accident, they decided to hold a collection for the WAA at Michelle’s funeral. Then in January 2005, on Michelle’s birthday, they organised an event at the Melksham Assembly Hall with an auction. This became an annual event, as well as other events they organised on key dates during the year.

Sandra said, “The birthday ‘do’ in January 2005 was our first event; so many people came. We then held other events such as a picnic in Giles’ wood where her two benches and trees are near the canal. We’d also do something at Christmas and decorate the tree in the woods. The scouts, brownies, friends, family and people in the Melksham community would help. We also had carols and mulled wine. These were our biggest fundraising events because we had so many people there.”

Skydives, half marathons and cycle challenge

The family have also taken part in charity skydives, half-marathons and a cycle challenge which Michelle’s father, John, completed on Michelle’s bike. Recently, the family boosted the funds to the £20,000 milestone when Michelle’s brother, Darren, ran the London marathon for the first time, generating over £1,000 for WAA.

Sandra says, “The time has come to close this now. We will still continue to fundraise as a family. Things have gotten so expensive for people now and a lot of people have their own charities that they give to, so we have decided to close it publicly. Myself and John are still volunteers for the WAA, so we will continue to help them and donate as a family.

“We are so thankful and so grateful for all of the support people have given over the years. I once heard [a quote] that said ‘we know it won’t get better but we can get better at it’. Thank you to everyone.”