A NEW scheme to mark out a crossing area in Snarlton Lane for families walking to Forest & Sandridge Primary School, has been supported by town councillors. They described the current situation as a ‘serious accident waiting to happen.’ 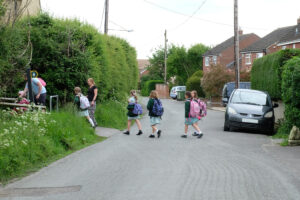 Complaints have been made over the last few years about the safety of crossing the lane by parents of children at the school. In June, Wiltshire Council said it was ‘unlikely’ that the crossing point in  Snarlton Lane, opposite a housing development, would meet the requirements for a controlled crossing point to be installed.

However, Wiltshire councillor Mike Sankey, who represents East Melksham, attended a recent meeting of the town council’s economic, development and planning committee, to put forward his own plan. Cllr Sankey proposed using a different coloured road surface which, he said, could be installed ‘as soon as possible’ to mark out the crossing area in the lane.

Cllr Sankey said the work should be carried out as soon as possible, but explained, The only issue is it will require Snarlton Lane to be closed for four hours whilst this work is happening and there is no alternative vehicle access for Snarlton Lane.”

This week, work to extend the primary school has begun. Cllr Sankey said, “With the extension of Forest and Sandridge school, this will potentially increase the footfall. I ask that you support this request.”

Councillors were in support of this and raised concern of the ongoing issue and the need to spend the money to resolve this. Melksham’s mayor, cllr Simon Crundell said, “This is a horrifying crossing. We can’t do a zebra crossing for different reasons and it is not at all obvious from where the next jet of children will be sent out into the road. It’s pennies to pay, verses the risk of someone potentially hitting a child.”

Echoing the risk and need to continue with this work, cllr Jon Hubbard said, “This has been an ongoing battle for years and years in trying to solve this and install additional signage, barriers to stop kids being able to run straight into the road or a crossing point.

“There is great reluctance from highways [Wiltshire Council] to do anything at all and now if they are agreeing to tarmac, we need to get this down as quickly as possible, before they change their mind again. Although it is a quiet road and although it is only residents on the whole using it, this is a serious accident waiting to happen.”

Cllr Graham Ellis said, “This is a very difficult location and the children do just appear basically from the hedge. Having been up there a number of times, I would say this looks like just about the only sensible solution. We can always suggest that the work be done, if it requires a four-hour closure, between 1am and 5pm in the morning or people park out at the Foresters or somewhere like that, whilst this work is going on.

“Blocking off a cul-de-sac is difficult we know but hopefully the local people will appreciate and know what we are doing and why we are doing it.”

The council will now work with Wiltshire Council to have the plans approved and will negotiate splitting the total cost of £2,500 to fund the work.