Work to replace the town council’s maintenance shed at the King George V Park in Melksham has still not started because costing plans have not been issued for the project to move forward. 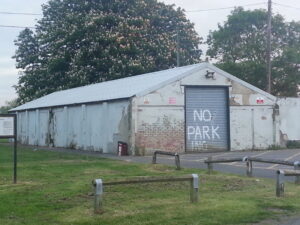 The new maintenance building was estimated last year to cost the council £200,000 over 15 years from a public works loan. The current building, which was previously owned by Wiltshire Council, has deteriorated and now unused. It was included in some services that the town council took over from Wiltshire Council and councillors were told that they needed a depot to store essential plant and equipment when taking over these services.

In October last year, a presentation from NVB architects was given to the town council, resulting in a ‘unanimous’ vote for the project, and planning permission was later agreed by Wiltshire Council.

However, at a meeting of the town council’s asset management and amenities committee last week, it was highlighted that a detailed costing plan for the project was still not in place.

Sharing concern at the lack of progress, cllr Jon Hubbard said, “This is turning into the new campus! We should have had shovels in the ground a year ago! I cannot comprehend why, when we have got planning permission for this, why a detailed costing has not gone ahead.”

At the meeting, councillors agreed that a detailed costing plan would now be put together, which would be shared at a meeting of the full town council. Cllr Hubbard said, “We need to instruct officers to make this a top priority to get a detailed costing and bring to the full council meeting at the earliest opportunity and second meeting if necessary, so we can progress with this project.”