Plans to renovate Melksham’s old HSBC bank building into a professional artist studio and one bedroom apartment have been supported by town councillors, after the building has been stood empty for five years. 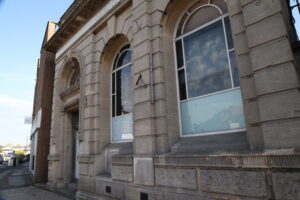 At the time of its closure in 2017 many local people expressed concerns at losing the local branch of the HSBC bank. Now, town councillors have supported plans to bring the space back and utilise it in a new multi-purpose development, with a professional artist studio on the ground floor and one-bedroom apartment on the first floor.

Councillors considered the plans at a meeting of the town council’s economic, development and planning committee, held on 10th October. Highlighting that filling the space is a positive development plan, after the building has remained idle for several years, councillor Saffi Rabey said, “I feel very positive about this, that building has been empty for so long and I think the space lends itself well to both of those things.”

Wiltshire Council will make the final decision over the submitted plans.