A LACK of lighting in the King George V Park has raised safety concerns among councillors, who are working to resolve the issue by installing additional lighting to ensure the safety of park users after daylight hours. 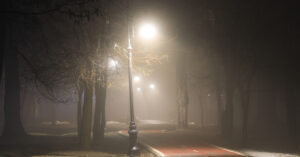 Melksham Town Council had previously instructed consultants to look into the possible options for the types of lighting available and the cost of the project to install the lighting. However, in the asset management and amenities committee meeting on Monday 17th October, councillors reviewed two quotes provided by the consultants, which they described as ‘eye-watering.’ So far, the cost of employing the consultants has reached over £7,000.

When discussing the price discrepancy of over £30,000 between the two quotes received, councillors stressed the need to have their questions about the costs answered. Cllr Jon Hubbard said, “We can’t make a decision on this without anybody answering these questions, because its obscene amounts of extra money.”

Cllr Tom Price said that the project should be moved forward as soon as possible. He said, “As a matter of urgency, I don’t want to go through another winter of no lights in that park. I walk around that area on the way home from work and I know how dark it is. By half five in the evening, it is pitch black. By next winter, I do not want to see the same.”

Councillors agreed to call a special meeting to receive a report and presentation from the design consultant to explain and demonstrate the two options.