Town’s weir could be a ‘golden opportunity’ to produce hydropower 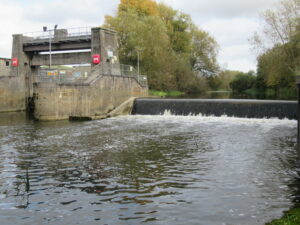 At last week’s economic, development and planning committee meeting, councillor Colin Goodhind put forward the proposal from Wilts & Berks Canal Trust. The canal trust was asking if Melksham Town Council would be interested in a project to generate electricity using the flow of running water at the town’s weir on the River Avon Weir.

The plans are part of the Melksham Canal Link project and, originally, suggested the installation of a new weir to generate hydropower.

However, at the meeting, cllr Goodhind said the canal trust is now suggesting using the existing weir to produce hydropower.

He said, “A new weir is now not going to be included in the Melksham Link plan, as it is no longer considered necessary. But technology has moved on and incorporating the ability to generate hydroelectricity in the existing weir is considered even more attractive and not dependent on completion of the Melksham Link. Opportunities for providing sustainable power for vehicle charging in the Bath Road car park at the very least appears feasible.”

Supporting this proposal and advocating the positive benefits this would have for the community, cllr Jon Hubbard said, “Yes, yes and yes! There are numerous examples of town councils getting involved in renewable energy generation. I would welcome it with open arms. This is a golden opportunity.”

Inspiration for this project would be taken from other town’s such as Bradford on Avon that currently uses the weir to generate hydropower and have been doing this for several years.

Confirming his interest in doing this in Melksham and echoing cllr Hubbard’s support for the project, Melksham’s mayor, cllr Simon Crundell said, “Let’s do this! It would be wonderful if we could generate the kind of electricity we produce. It would be good for Melksham!”

Town councillors will now hold an information session with professionals to find out how the technology works.