A PUBLIC survey asking the town about the future use of the pavilion in the King George V playing field, has reinforced the message that families want a park café and toilets. 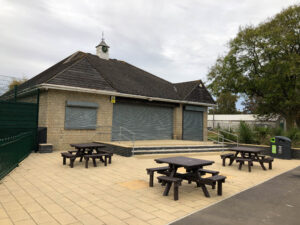 The pavilion at the park, which is managed by Melksham Town Council, was previously run as a café when the popular Splashpad opened. Mobile toilet facilities were also provided nearby.

In August 2021, the tenants of the Cricketers Café decided not to renew their short-term lease and the café closed the following month. In March, councillors said that a temporary solution for the summer would be found and they said they were ‘embarrassed’ that a long-term plan had not been agreed.

However, during this year’s hot summer, the town council was criticised for still not providing a café and toilet facilities. An icecream van visited the site as a stop-gap measure. Councillors agreed to hold a public survey from 25th August to 30th September, asking the community what they would like to see the space used for.

Surveys were shared with the community through being displayed on boards at the campus, the pavilion and the town hall, as well as online surveys being sent out. In response, there were 57 responses, 48 online and nine on paper, with the highest number of requests for a commercial café with toilets, and for the building to be well maintained.

Discussing the results of the public survey in the town council’s asset management and amenities meeting, held on Monday 17th October, cllr Pat Aves said, “There is clearly a lot of public interest in having a café open. I think we should take full notice of that and do something about it.”

In the discussion about the results from the public, cllr Jon Hubbard suggested the need for clarity over whether the café will be community-led or a commercial venture.

He said, “In the questionnaire we talked about a commercial café. I think this is slightly dangerous as people will be thinking they’ll have the likes of Costa, or something of that ilk in there and that may not necessarily be the case.”

Councillors agreed they should take inspiration from other towns who already have community-led cafes. They also felt it would be a good opportunity to provide a space for groups to meet, such as a knitting group.

Cllr Jon Hubbard said, “Hillworth in Devizes is a cracking example of what I think we ought to be aiming for and that in many ways couldn’t be further from what a Costa would be. I’m not anti-Costa, but it is more of a community-led thing and really gives opportunity for things to happen within that facility, not only in terms of coming and having something to eat and drink, but at the same time seeing a display about things that are happening, find out what is happening in the community, taking part in all sorts of other things.

“I think that there is a clear message for us of where we should be going.”

Members of the committee will now research towns with similar cafes in parks to gather a list of likes and dislikes. They will then discuss the list and submit to officers to create a detailed specification.